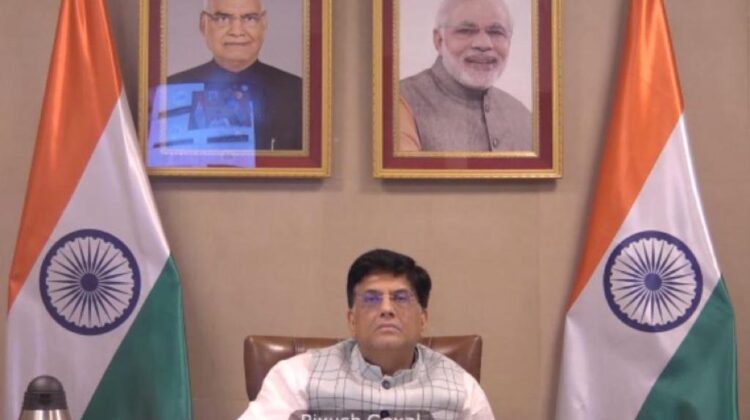 NEW DELHI : Union Minister of Railways, Commerce & Industry, Consumer Affairs, and Food & Public Distribution Shri Piyush Goyal, along with the Minister of Ports, Shipping and Waterways Shri Mansukh Mandaviya on Sunday interacted with the industry leaders about the likely impact of Very Severe Cyclonic Storm “Tauktae” (pronounced as Tau’Te)and  preparedness for facing the same. The meeting was called on the directions of the Hon’ble Prime Minister.The meeting was also attended by senior officers of Indian Meteorological Department, Ministry of Ports, Shipping and Waterways, Railways ministry, NDMA, and states of Gujarat, Maharashtra & Goa, and UT of Dadra and Nagar Haveli and Daman and Diu.

DG, IMD informed that the “Tauktae” is very likely to move north-north-westwards and reach Gujarat coast in the evening hours of 17th & cross Gujarat coast between Porbandar & Mahuva (Bhavnagar district) around 18th May early morning, which will lead to winds with the speed of over 150 km/h, heavy rainfall and high Tidal waves. NDMA informed about their preparedness for the relief and rescue actions to be taken in the affected areas, and deployment of various NDRF teams in the region. Ministry of Ports, Shipping and Waterways informed about their assessment of the situation and steps being taken and envisaged to deal with it in an effective and timely manner. The states’ officials informed that the situation is being closely monitored by them, and the administration is geared up to meet the exigencies. The Industry leaders gave certain suggestions, and also informed about the actions taken by them for mitigation and reducing the impact of the cyclone.

In the wake of Covid-19 pandemic prevalent, the issue of continuous availability of Oxygen, maintaining buffer stocksof medicines and essential items, & well-being of patients in the areas likely to be affected was stressed in the meeting. Smooth functioning of Communication facilities and other utilities also came up in the meeting.

Shri Goyal said that the views expressed by the industry participants and the State officials show their confidence and readiness in handling such a natural calamity in an effective manner. He said that power will be the major focus area, as the same has to be switched off due to safety reasons for sometime, but should be restored quickly as per the conditions. The Minister said that there is a merit in making available satellite phones at strategic places, for better communication, He expressed satisfaction at the fact that the industry has stored emergency spares and fuel for the duration. Shri Goyal urged all of them to keep their eyes and ears to the ground, and work in the spirit of cooperation. He said that there could be a surge effect post-cyclone, and hence requested all to keep their eyes & ears to the ground, monitor the situation & support the health care personnel. He also stressed that all the people who are involved in the production of liquid medical Oxygen, Pharma industry, and all those who make cylinders or products in the supply chain of the Pharma industry will be given priority to come back into operationThe helplines of various authorities should be up all the time, and respond in a empathetic manner.He directed the Railway authorities to closely monitor the situation, and be ready to rush the essential items to the affected areas in the shortest possible time, and provide help in any manner.The Minister said that 24 X 7 control room to monitor cyclone progress is already functioning while Intensive patrolling of assets (OHE & track) has begun.  Railways has also taken several measures to ensure uninterrupted supply of Oxygen. The Minister said that relief material should be properly channelized so that the Common man gets the relief and the unscrupulous elements are not able to take advantage. He urged all the big industries to look after their local area to support small industries, suppliers & neighbourhood industry associations.

Shri Mansukh Mandaviya said that Coastal areas in the western India are having a lot of industries. He said that the state Governments are equipped for undertaking the relief and rescue operations, and have the experience in doing so. He, however, emphasized on pre-planning and pre-positioning so as to minimize the damage to essential equipment, cargo or people.