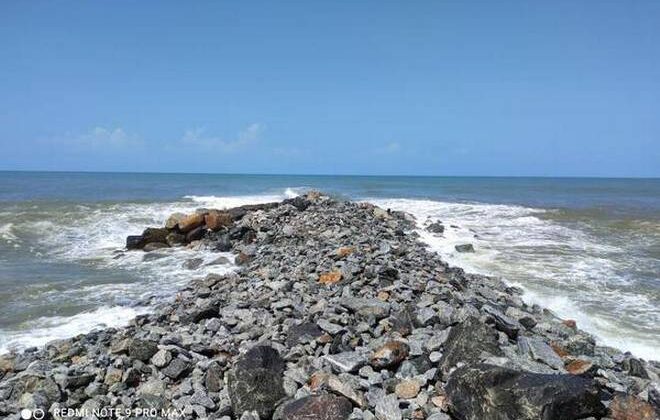 Around 176 m of the upcoming breakwater, a critical component of the International Multipurpose Deepwater Seaport project at Vizhinjam, has been washed away in the high waves caused by Cyclone Tauktae.

The multi-port operator tasked with the execution of the project, Adani Vizhinjam Port Private Ltd. (AVPPL), noticed the damage only on Monday noon as the work had been suspended since May 13 because of the rough sea.

Of the 3.1-km-long breakwater, the AVPPL had completed work on 850 metres. The damage sustained is from 676 m onwards.

“The sea is rough and the loss can be measured and the impact known only after the waves stabilise and the sea turns calmer. To find the exact impact, assessment will be done using multi-beam bathymetric survey,

The work on the breakwater were earlier hit badly by Cyclone Ockhi November 2017. “The impact is more this time as more granite has been deposited. Granite to the depth of 15 m was washed away. The repairs will commence once the weather permits,” the official said.

The AVPPL has reported the incident to Vizhinjam International Seaport Ltd. (VISL), the government entity overseeing the project.

The AVPPL had already missed the December 2019 deadline set to commission Phase I of the seaport as per the pact inked between the State and the company in August 2015.

It could also not meet the 1,000-day target of September 1, 2018, announced by Adani Group chairman Gautam S. Adani while inking the pact. Besides Cyclone Ockhi in November 2017, the project, coming up in PPP mode, had been hit by the southwest monsoon of 2018, shortage of granite, and floods.