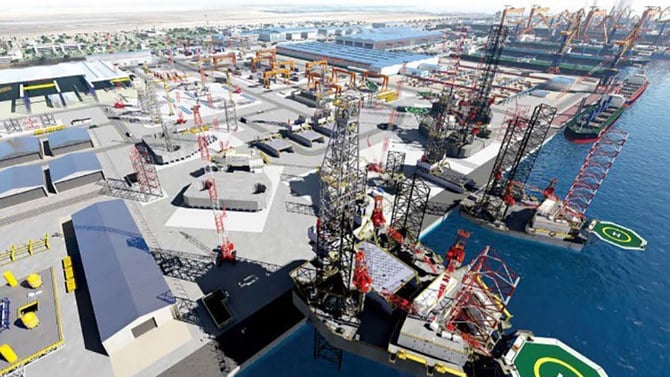 RIYADH : Ras Al-Khair Port has posted its highest monthly throughput ever by handling around 1,060,835 tons last December in a reflection of its unparalleled operational efficiency and reliability.

The historic performance marks a new chapter in the industrial port’s journey as a leading maritime gateway for mining imports and exports while serving the overall objectives of the Saudi Ports Authority (Mawani) in building a world-class tradeinfrastructure in the Kingdom as envisioned by the National Transport and Logistics Strategy (NTLS).

Record books were rewritten several times in the past year by Ras Al-Khair Port, including the highest daily throughput at 91,386 tons as well as the maximum freight handled by a berth in a day at 22,707 tons besides servicing 47 marine vessels in December.

The state-of-the-art port began operations in 2016 to cater to over 100 diverse industrial projects in the city of Ras Al-Khair, the Kingdom’s new mining hub. Built over 23 sq. km., the port features 14 modern berths and a vast fleet of advanced equipment that can handle up to 35 million tons of cargo yearly.

About the Saudi Ports Authority (Mawani)

Saudi Ports Authority (Mawani) was established in 1976 to oversee the operations of the Saudi ports. Since its inception, Mawani has been keen on transforming the Saudi ports into investment platforms and facilitating the Kingdom’s trade with the rest of the world. The Authority seeks to achieve an effective regulatory and commercial environment supported by an operating model that enables growth and innovation in the Kingdom’s maritime industry. It also envisions developing a sustainable and prosperous ports sector to consolidate the Kingdom’s position as a leading global logistics hub. Mawani strives to realize Saudi Arabia’s economic and social ambitions by ensuring reliable and efficient logistics operations, as well as creating a safe and sustainable maritime environment. Developing the Kingdom’s industrial capabilities to fulfill the objectives of the National Transport Strategy in line with Saudi Vision 2030, has and will always be one of Mawani’s main objectives, thus contributing to making Saudi Arabia a pioneer in the ports sector.