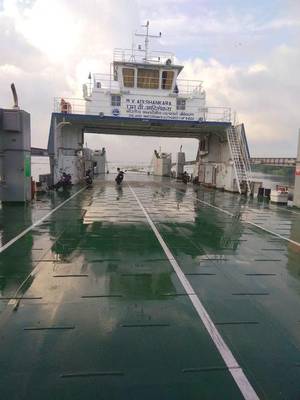 KOCHI : The second roll on-roll off (Ro-Ro) vessel of the Inland Waterways Authority of India (IWAI), which was handed over to the Kerala Shipping and Inland Navigation Corporation (KSINC) for operation, is set to begin commercial service on the Bolgatty Island-Willingdon Island stretch in Kochi from today, Monday. It is in view of the rise in demand from operators of container lorries and other vehicles hit by skyrocketing fuel prices.

“Smaller goods carriers and two-wheelers too have been relying on the single Ro-Ro service during the past few weeks. The demand is on the rise, and it peaked at 150 vehicles, including 18 two-wheelers and a car, on Friday. Hence, we decided to introduce the second vessel that was handed over by IWAI,” KSINC sources said.

The second Ro-Ro vessel will operate at regular intervals every 30 minutes, from 8 a.m. to 7.15 p.m. (the last trip will end at 8 p.m.), barring a lunch break from 1 p.m. to 1.40 p.m. The increase in prices of diesel and petrol has resulted in more motorists and goods carriers preferring the waterway route.

A hotline number (98462-11163) is available on board the vessel, which will help the public know the service timings, the sources said.

“The second vessel has been introduced on a trial basis. With people coming to know of the manifold advantages of water transport, we hope there will be sound patronage for both the vessels,” they added.

A regular Ro-Ro service from the city to Fort Kochi and back had been mentioned in the election manifesto of the LDF. This is expected to get even more patronage than the container Ro-Ro service.