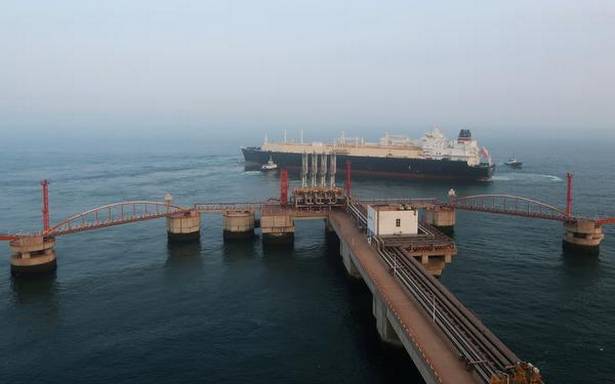 The FSRU will be set up on a Design, Build, Finance, Operate and Transfer (DBFOT) basis through the public-private-partnership (PPP) route, according to the official.

Currently, there are five LNG terminals commissioned in India — at Dahej and Hazira (Gujarat), Kochi (Kerala) and Dabhol and Jaigarh (Maharashtra).

“The demand for LNG has been increasing and it is the stated policy of the Government of India to double the share of LNG in the energy mix of the economy. LNG imports are expected to be substantial since domestic supply of LNG is not able to meet the demand for which supporting infrastructure requires to be developed. FSRUs within port limits offer a low-risk, fast-track and flexible option compared to traditional on-shore LNG terminals,” an official with the ministry of ports, shipping and waterways said.

The ministry has issued guidelines for setting up FSRU for handling liquefied natural gas (LNG) cargo at major port trusts.

Land license model will be followed under a single stage e-tendering for implementing FSRUs with private funds wherein the bid reserve price will be the water area charges set as per the land policy prevailing at a particular port.

The entity quoting the highest premium above the reserve price to be paid to the port will win the contract, typically for 30 years.

The total license rental for the license period is to be paid upfront, according to the ministry guidelines.