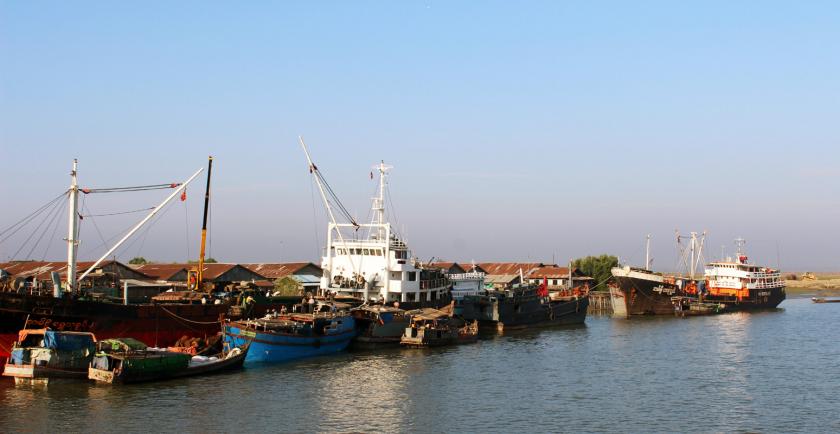 NEW DELHI : Union Minister of Ports, Shipping and Waterways(MoPSW) Shri Sarbananda Sonowal on Monday said the Sittwe Port project in Myanmar is developed and ready for operation. The project will connect Sittwe port in Myanmar to the India-Myanmar border and is expected to contribute to the economic development of the northeastern states by opening up the sea route for the products.

The Kaladan Multimodal Transit Transport Project is said to be the most significant project that India has undertaken in Myanmar.

According to a statement, the Kaladan Multi Modal Transit Transport Project was jointly identified by India and Myanmar to create a multi-modal mode of transport for shipment of cargo from the eastern ports of India to Myanmar as well as to the northeastern region of India through Myanmar.

It also provides a strategic link to the North-East, thereby reducing pressure on the Siliguri Corridor.

It includes a waterway component of 158 km on the river Kaladan, from Sittwe to Paletwa, and a road component of 109 km from Paletwa to Zorinpui, on the India-Myanmar border in Mizoram.

According to the officials in the Ministry of Development of North Eastern Region (DoNER), due to the delay in completion of the vital project owing to numerous reasons, its cost has increased eight to nine times.

Sonowal while talking to the media in Guwahati announced an investment of Rs 1,016 crore for the development of inland waterways in Assam for the forthcoming years.

He said that Prime Minister Shri Narendra Modi will unveil the foundation stones for two major initiatives while inaugurating maritime skill centres for the northeast to ramp up capacity in Pandu port in Guwahati on January 13.

The other initiatives are the Ship Repair Facility at Pandu Multi Modal terminal and an elevated road connecting with the Multi Modal Terminal at Pandu with National Highway 27 in Guwahati.

The Minister said that the facilities are part of major initiatives planned by his Ministry for revamping inland waterways in Assam and the other northeastern states.

A comprehensive package to develop Brahmaputra (National Waterway-2) has now been enhanced to Rs 474 crore as well as an enhanced package of Rs 148 crore has been earmarked for the development of Barak river (NW-16).

Highlighting the success of the rejuvenated waterways as an alternative conduit of logistics under the Narendra Modi government, Sonowal said that the cargo movement in Indo-Bangladesh Protocol Route (IBPR) has increased from 2 MT in 2014-15 to 5.43 MT in 2021-22.

“Be it the cargo or passenger movement via waterways, we are planning and executing policies to build capacity in the region,” he said.

Sharing his views on the scheduled launch of Ganga Vilas world’s largest river cruise from Varanasi to Dibrugarh, the Union Minister added: “Ganga Vilas will open up a new vista for the tourism in the country.

As the cruise will spend more than ten days in Assam, the foreign tourists will be able to explore and experience a new horizon of socio-cultural hue along the river coast.”

He said that the Maritime Skill Centre for northeast would be instrumental in honing our rich talent pool and acquire much valued skill sets by the candidates for better employment opportunities in the burgeoning logistics industry.