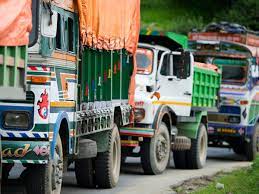 NEW DELHI : The government on Wednesday said it has launched an IT-based smart enforcement app for implementation of rules and regulations related to road-based violations by trucks, a move aimed at reducing transportation and logistics cost of the industry.

The app would help in decreasing the number of physical checks of commercial vehicles by enforcement officers; reduction in the number of cash challan by issuing e-challan; and higher revenue collection due to reduced human intervention. The commerce ministry said that on an average, a truck in India covers 50,000-60,000 km a year, compared to over 300,000 km in advanced nations such as the US.

One of the key reasons is delays due to random stoppages for physical checking of vehicles and verification of documents etc. It said that while GST (goods and services tax) has helped improve the situation, there is a long way to go to reach the advanced country levels.

There are over 60 different instances of potential violations of various rules and compliances that enforcement agencies need to watch out for. The responsibility for this enforcement lies with state governments departments – commercial tax, transport, police and other agencies. As a strategy to reduce logistics costs on road transportation, it said the logistics division has developed a risk-based approach on the implementation of smart enforcement of rules and regulations related to road-based violations by trucks.

It has also developed an IT-based solution to make enforcement mechanism technology driven. “In a meeting with the officials of the state governments held today, the risk-based approach was shared and the IT-based Smart Enforcement App was unveiled,” it added.

By using the integrated smart solution, data related to goods being carried on a truck would be fetched from the existing Goods and Services Tax Network (GSTN) and VAHAN databases and this data would be available to enforcement officers on the road in advance for approaching trucks.

“Based on a risk matrix that uses historical patterns, the app assigns a risk profile to the truck helping the officers decide whether to stop it for further scrutiny. It requires the officer to issue all fines, penalties, or any other punitive measure through the app, ensuring transparency,” the ministry said adding the app includes features that keep records and help reduce ad-hoc implementation of these rules and regulations.

The application would have the ability to integrate with all the sensors, Weigh in Motion, and cameras available with the state government or National Highway Authority to allow remote enforcement. This would significantly reduce the need to deploy officers on the ground since the app would be able to alert officers whenever a vehicle is in violation.

Special Secretary, Logistics, Pawan Agarwal, said that technology adoption and risk-based approach is the only way forward. “All states expressed their interest in implementing such solutions at a wider scale. Moving forward, it was decided that based on the level of preparedness of the states, the logistics division would take up customization of the app for different states depending on their specific requirements,” it added.