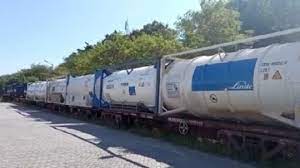 KERALA : The Southern Railway has delivered over 1,000 MT of Liquid Medical Oxygen to Kerala & Tamil Nadu through 16 Oxygen Express trains since the second wave commenced in the country, according to a statement.

The railways has delivered a total of 246.56 MT of Liquid Medical Oxygen (LMO) to Kerala so far and received its first loaded oxygen express carrying 6 Oxygen containers (117.9 MT) dispatched from Tata Steel Siding in Kalinganagar, Odisha on May 16 at Vallarpadam Container Terminal, Kochi.

The second Oxygen Express for Kerala dispatched from Rourkela carrying 128.66 MT in 7 containers arrived at Vallarpadam Container Terminal, Kochi at 01.35 hours on May 22, 2021.

The sixteenth loaded Oxygen Express with 3 loaded tankers (19.54 MT) from Rourkela arrived at Madukkarai near Coimbatore on Saturday.

The seventeenth loaded Oxygen Express dispatched from Rourkela with 84.1 MT in 4 containers is expected to arrive at Tondiarpet on Sunday.

Indian Railways has delivered nearly 14,500 MT of LMO in more than 884 tankers to various states across the country. A total of 224 Oxygen Express trains have completed their journey so far and brought relief to various States.

Oxygen Expresses have been delivering more than 800 MT of LMO to the nation each day now.

The Railways said that it had mapped different routes with Oxygen supply locations and keeps itself ready with any emerging need of the States.

States provide tankers to the Indian Railways for bringing LMO.