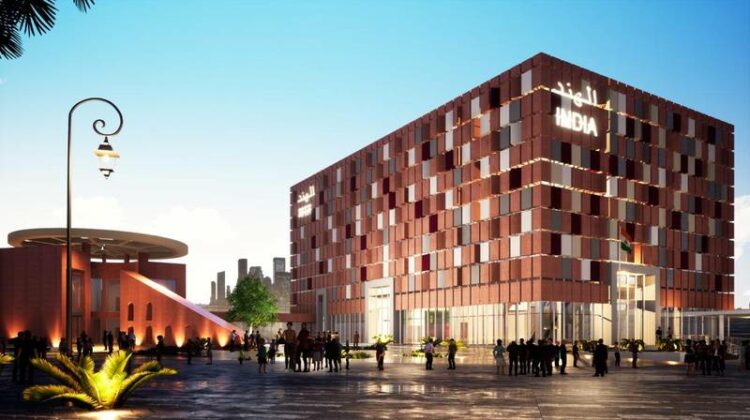 DUBAI : The India pavilion at Expo 2020 Dubai has been completed with officials describing it as a “permanent footprint” and testament to close ties with the UAE.

The $70 million (Dh257 million) pavilion has received certificates for building completion and fire clearance, officials told the media in India .We are among the few that have a permanent pavilion so it will be a footprint in Dubai forever said Mr. BVR Subrahmanyam, India Commerce Secretary.

The four-storey pavilion built across a 0.5-hectare plot is one of the largest at the Dubai South site.

“The building is very innovative, it showcases,heritage, the past, present and future. It captures the journey we are on, our dreams and ambitions. It’s absolutely stunning.“We are among the few that have a permanent pavilion so it will be a footprint in Dubai forever after this over.” Most of the Expo pavilions must be dismantled after the World Fair ends on March 31. The India pavilion will be one of at least three structures to remain.

Mr Subrahmanyam described it as “a permanent asset for India in a major trading nation”.

About 200 revolving panels have been fitted as part of a constantly changing facade with orange and brown shaded blocks.

At night, this will be converted into a massive screen on which Indian tourist destinations and dance sequences will be projected.

High-tech software has been used to create green tunnels bursting with medicinal herbs in a section dedicated to yoga and meditation on the lower floor. A separate section is focused on the country’s space exploration programmes.

The upper floors will cover industry, gems and jewellery and the Bollywood movie business.

Mr Subrahmanyam said the Expo provided a major opportunity for forging trade deals with some of the 192 countries represented.

Each of India’s states will participate in the World Fair that opens on October 1 with some hosting exhibitions on renewable energy, others on green technology, solar energy, industrial investment and agricultural exports.

“Dubai is good for business, India is open for business. It’s a nice confluence,” the senior official said.

“I hear a large number of MoUs (memorandums of understanding) will be signed. Everybody will be available on that campus, the mini city that has come up.” a senior official said.

Inside the pavilion, models of the Hindu temple being constructed in Abu Dhabi will be on display along with replicas of other shrines in India including the Ram temple in Ayodhya.

Outside the pavilion, a giant spinning wheel, or charkha, has been set up as a symbol of Indian leader Mahatma Gandhi’s call to weave cloth instead of relying on foreign goods during India’s independence struggle against the British.

The World Fair is typically held every five years for up to six months. Expo 2020 was postponed by a year due to the coronavirus pandemic but permitted to keep the name.

The event is due to open on October 1 and will welcome millions of visitors throughout its six-month run.