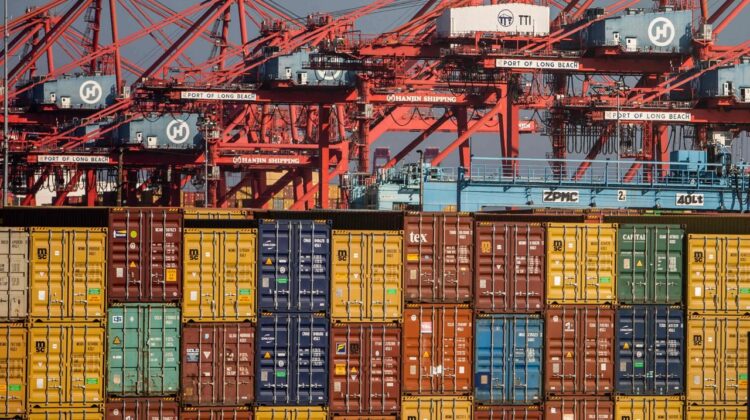 CALIFORNIA : The biggest export out of Southern California these days is air. And it is suffocating the supply chain.

Hundreds of thousands of empty containers are filling marine terminals and truck yards across the region and tying up scarce trucking equipment as ocean carriers scramble to return empty boxes to factories in Asia. The gridlock on the export side of U.S. supply chains is the mirror of the congestion tying up imports, and officials say it is complicating efforts to unwind the bottlenecks at the ports of Los Angeles and Long Beach.

Shipping lines have made recovering the empty containers a priority because they want to get them back across the Pacific Ocean to take advantage of high freight rates for Asian exports. That has fractured a round trip for shipping containers that normally stretches across the U.S., with more customers now unpacking shipments at nearby warehouses already swamped with goods.

With ships already full, there isn’t enough space for empty boxes that are then piled onto increasingly high stacks to await transport and loading onto outbound vessels.

Hundreds of private parcels of land have been opened up for empty containers, Gene Seroka, Executive Director of the Port of Los Angeles, told harbor commissioners at a recent meeting. Mr. Seroka said that during a recent helicopter tour from the port complex to San Bernardino, 80 miles away, he saw “containers strewn throughout the region.”

Some of those boxes might have been filled with goods. But because shippers don’t like to leave millions of dollars of merchandise in public, the majority were most likely empty.

The boxes are the result of an import surge that swamped the domestic supply chain this year as consumers switched spending from services to goods during the Covid-19 pandemic. Loaded imports at the California ports complex totaled the equivalent of 6.9 million containers between January and August, an increase of 23% compared with the same period in 2019, according to research and consulting firm Beacon Economics.

The ports handled the equivalent of 6 million empty export containers during the first 10 months of this year, 20% more empty boxes than in all of 2019, according to data from the ports.

About 110,000 empties are stacked at port terminals on a typical day, officials say, and thousands more are piled in private yards and even scattered along streets. Before the current congestion, the ports had rarely tracked the number of empty containers sitting at docks.

Hundreds of thousands of boxes are lifted from ships each month, delivered to warehouses and their contents emptied. Truckers say that when they try to return the boxes they find terminals so full that it is almost impossible to secure an appointment to return them. “It is like playing the lottery,” said Leslie Luna, freight coordinator for Luna and Son’s Trucking LLC, a small, short-haul trucking firm in Commerce, Calif.

Ms. Luna said she sometimes stays up until 2 a.m. or 3 a.m. refreshing appointment-booking websites to return containers that fill her company’s 2-acre yard.

To return a container Ms. Luna has to make an appointment on a different website for each of the port complex’s 13 terminals. Each terminal will only accept certain boxes for certain ocean carriers on certain days. The terminals are so full they often don’t take boxes at all or add requirements that truckers pick up an inbound box for each one they drop off.

The result is that many truckers are stuck with an empty container sitting atop the trailer, known as a chassis, that they need to pull loaded imports from the harbor. The Harbor Trucking Association, in a recent survey of 43 trucking firms, found that about 8,100 chassis were stuck beneath empty containers, contributing to an area-wide shortage of the equipment.

Ian Weiland, Vice President of Operations at Junction Collaborative Transports, a short-distance trucking company based in Long Beach, said that in recent months he has had to send about 25% of his drivers home after their first delivery of the day because of the hundreds of empty containers taking up chassis in his yards. Without an empty chassis, the drivers can’t pick up a new container.

That changed in early November, Mr. Weiland said, when the firm suddenly found it was able to make appointments for containers it had been unable to return for weeks. “Someone waved some sort of magic wand around Nov. 1,” he said.

The change coincided with the ports’ decision to impose a daily fee starting this month on loaded containers that dwell at terminals nine days or longer. Boxes will be assessed a charge of $100 on the first day over the limit and the fee would escalate if the container doesn’t move so that by day seven the charge would total $2,800.

The ports have postponed implementation of the fee, giving retailers, manufacturers and logistics companies more time to pick up boxes. Terminals know one way to help shipping customers retrieve boxes is to accept more empty containers and free up truck chassis.

The terminal, which accepts boxes for five ocean carriers, leased 20 acres of nearby land, increasing its storage capacity for empty containers to 19,000 boxes from 6,500. It also worked with another firm to create a third-party storage facility on 12 acres of land with capacity for 5,000 boxes. The facility opened three weeks ago and already has 3,000 containers, Mr. McCorkle said.

Several ocean carriers have sent small ships to pick up hundreds or a few thousand boxes at a time, but that hasn’t done much to clear the backlog. Some terminal operators and ocean carriers said they expect larger ships to arrive in Southern California in the coming weeks with capacity to pick up more boxes when the rush to transport goods eases after the holidays, making more ships available.

Some exporters say the ocean carriers’ drive to get boxes quickly back to Asia for imports has hurt their business.

Greg Jackson, Executive Vice President at Border Valley Trading, a hay, alfalfa and straw exporter based in Brawley, Calif., said he struggles to secure space on ships out of Southern California. What bookings he does make are frequently canceled, he said.

Loaded exports out of the port complex totaled the equivalent of 2.2 million containers in the first 10 months of this year, 1 million boxes fewer than total exports for all of 2019. The Agriculture Transportation Coalition, a lobby group, said a survey of its members showed that 22% of confirmed overseas sales are being lost because exporters cannot get their products shipped out.