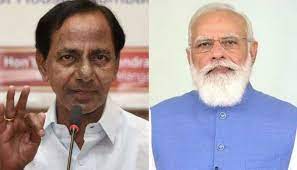 During a meeting with Prime Minister Shri Narendra Modi in New Delhi, the Chief Minister submitted a list of demands including sanction of grant-in-aid for the proposed textile park, establishment of Indian Institute of Management (IIM), Indian Institute of Information Technology (IIT), Tribal University and 21 Jawahar Navodaya Vidyalayas.

He said industrial corridor projects will have a significant impact on employment generation in the less-developed region of the country and will lead to immense economic development.

KCR, as Rao is popularly known, told Modi that the industrial corridor between Hyderabad and Nagpur is proposed on the lines of the Delhi-Mumbai industrial corridor, covering a length of 585 km. The project aims to exploit the central location of Nagpur which is proposed as a multi-modal international cargo hub and Hyderabad, which is a major IT and manufacturing destination.

“About 50 km on either side of the road and rail corridor is considered as the immediate influence areas. Project influence area comprises of a combined population of 40 million, constituting approximately 27 per cent of total population of both Telangana and Maharashtra,” it added.

KCR also urged the Centre to sanction a grant-in-aid of Rs 1,000 crore for the development of an integrated state-of-the-art textile park at Warangal.

The state intends to develop the textile park in 2,000 acres. The park will have an all-inclusive textiles value chain facility from fibre to fabric and thereafter to garmenting/apparel making.

KCR told the PM that an investment of nearly Rs 1,600 crore is required to develop the infrastructure facilities in the park. While seeking Rs 1,000 crore from the Centre, he said the balance cost will be met from the state government`s resources.

He pointed out that Telangana is the second-largest producer of cotton in India with over 60 lakh bales of long-staple cotton production annually.

The Chief Minister also demanded the sanction of an Indian Institute of Management (IIM) for Telangana. Though the Centre has a policy of establishing one IIM in each state, it did not sanction an IIM for Telangana as there is Indian School of Business (ISB) in Telangana.

KCR, however, wrote that ordinary students cannot afford to study in the ISB because of exorbitant tuition fee. He assured that the state government will provide the required land in the premises of the University of Hyderabad as there is more than 2,000 acres of land on the campus.

He also urged the PM to sanction an Indian Institute of Information Technology (IIIT) at Karimnagar under the PPP model. He said the state government would provide the required land and also contribute its share of funding as envisaged in the PPP model.

He also sought that the Education Ministry be asked to take steps to start the Tribal University in Telangana as envisaged in the State Reorganisation Act, 2014. He also wanted the Centre to set up this institution as a central university.

The state government has already identified 200 acres of land near Warangal to set up tribal varsity.

The CM also sought sanction of additional posts of Indian Police Service (IPS) officers in view of the creation of 13 new districts after the formation of Telangana state. He said the formation of new police districts, commissionearates, zones and multi-zones created the need for increasing total IPS cades from 139 to 195.

KCR also requested that the Centre completely fund the development of roads in areas affected by left-wing extremism instead of putting them in CSS format, in which the state are asked to contribute their share in the 60:40 ratio.