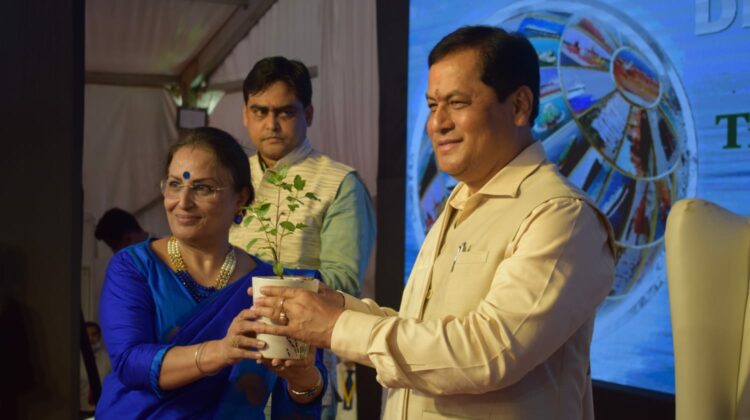 MUMBAI : The Shipping Corporation of India Ltd. (SCI) held the Valedictory Function of its Diamond Jubilee Celebrations on October 03rd, 2021, which was graced by the Honourable Union Cabinet Minister, Ministry of Ports, Shipping & Waterways Shri. Sarbananda Sonowal, as the Chief Guest and Minister of State for Ports, Shipping & Waterways Shri. Shantanu Thakur, as Guest of Honour.

A mesmerising Corporate Film narrating the history of SCI took the audience through the memorable milestones, challenges and eventual success culminating on a very high note of positivity and transformation.
Smt. H.K. Joshi, Chairperson & Managing Director, SCI, welcomed the dignitaries present and thanked them for their gracious presence on the event of the Diamond Jubilee which held great significance and memories for SCI. She hailed the contribution of SCI’s predecessors. She stated that SCI’s innovative measures, encompassed with SCIans’ resilient spirit, backed with financial prudence had made the organisation a fierce contender in the maritime sector. She stated that SCI continued to hold highest level of corporate governance and ensured its sustenance as an ethical organisation in future too. She made a mention of the in-house talent of the organization which had been used to its full potential for the event organized and sought the encouragement of the audience.

Honourable Minister Shri Sarbananda Sonowal released the Digital Coffee Table Book which reflected the journey and initiatives of the Shipping Corporation of India for the past 6 decades in commemoration of its rich heritage.
An enthralling cultural program ensued with a skit displaying the innumerable search & rescue operations conducted by SCI over the years and its willingness to rise to any occasion that was its uniqueness. The skit climaxed with the portrayal of the m.t. Swarna Krishna voyage of the All Women Officers’ Team of March 2021 who had represented as Indian ambassadors to the worldwide maritime community and in shaping an ‘equal’ future. The dramatic entrance of the Captain & Merchant Navy Officers who were on board the vessel when sailing, was a grand highlight and the audience was captivated. Minister, Ports, Shipping & Waterways was called upon to felicitate the bravehearts of the historic “All Women Officers” Voyage and silver plaques were presented to them.

Shri Sarbananda Sonawalji also flagged-off SCI’s Container vessel – SCI Chennai off Kandla on the EXIM trade, to support the exports target of the Honourable Prime Minister Shri Narendra Modiji and overcome the challenge of shortage of containers and high freight rates. SCI was lauded for the effort to support the trade and the nation.
The cultural programme ensued with remarkable dance performances symbolic of an empowered Team SCI on the threshold of taking future challenges.

Member of Parliament Shri Manoj Kotak, invoked SCI’s glorious past and thanked SCI for providing service to industry, to the people also by generating gainful employment.

Minister of State for Ports, Shipping & Waterways Shri. Shantanu Thakur congratulated the SCI family and stressed on the importance of Inland Waterways for future and urged the Organization to scale greater heights. He stated that the populace of India needs to be educated about the advantages as well as the opportunities in the maritime sector.
The Hon’ble Minister Shri Sarbananda Sonowal congratulated SCI on successful completion of six glorious decades being the premier shipping company of India. He commended SCI’s selfless service towards India and lauded the many achievements that SCI has accomplished on behalf of the nation. He lauded the endeavours of the Company to make the country self-reliant which was the vision of the Honourable Prime Minister Shri Narendra Modiji, and was also evident in the in-house talent that had been showcased during the Celebrations by the employees of the Company. He spoke of the transformation which had taken place through transportation and urged the organization to share its experiences and success with the entire country and its remote regions too to generate awareness of the seafaring profession and its benefits. He was particularly impressed by the spirit of diversity upheld by the organisation which had empowered women to take up careers and set an example for the country towards Atma Nirbhar Bharat envisioned by Honourable PM. He spoke with fervour and urged all to work as “Team India” to display Indian Maritime sector’s “Shakti” (Strength), “Sambhavana” (Potential) and “Sampada” (Wealth) to take India forward on the global arena with usage of technology.

Shri Atul Ubale, Director (Bulk Carrier & Tanker Division) rendered a Vote of Thanks speech towards the end of the programme.

The Diamond Jubilee year of the Shipping Corporation of India Ltd. (SCI), inaugurated on October 02nd, 2020 by the erstwhile Minister of Ports, Shipping & Waterways Shri Mansukh Mandaviyaji was a year-long celebration which finally culminated into a mega event on the 03rd of October, 2021.

The “Hirak Jayanti Mahotsav” has been a momentous one having various events conducted in its celebration. Several virtual seminars and workshops for yoga and well being, for strengthening the employees physically and mentally were organized enlightening SCIans through their life-enriching sessions in addition to various activities conducted over the year almost on a monthly basis.

The valedictory Function conducted in commemoration of the 60 glorious years of the Shipping Corporation of India Ltd. celebrated in pomp its existence as the premier shipping company of India.