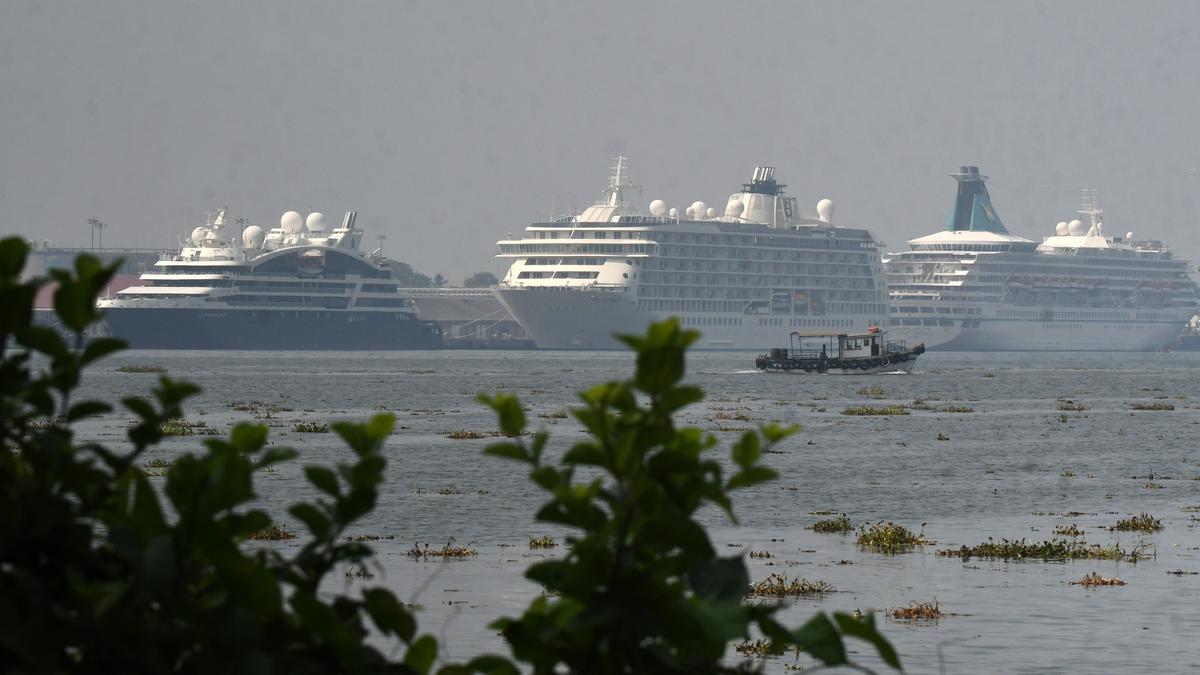 KOCHI : In what is being cited as a rarity, three cruise ships — The World, Artania and Le Champlain — called at the Kochi Port early on Tuesday morning, bringing a total of 781 tourists and 860 crew members.

The three vessels berthed at Sagarika, the first full-fledged international cruise terminal in India that was commissioned in 2021. A bulk of the passengers went on shore excursions to Kochi city, popular tourist locales in West Kochi, and the Alappuzha backwaters. Most cruise tourists are high-spending senior citizens from abroad.

The guests who opted for the backwater cruise in houseboats had lunch on board. Those who chose to visit Kumbalanghi — India’s first model-tourism village — partook in a host of ethnic activities that were arranged, including making of pottery, while also trying their hand at fishing. A traditional lunch was organised for them. Tour operators had also arranged tour of Kochi city and a tour in a few dozen autorickshaws covering popular heritage locales in Fort Kochi and Mattancherry.

Tour operators and guides cited the inadequacy of adequate number of well-maintained toilets at most heritage locales and the dumping of garbage at many places in Willingdon Island and West Kochi. Potholed bridges en route were yet another problem.

As of Tuesday, the number of cruise ships that called at Kochi during the fiscal touched 23 (including 13 domestic cruise vessels), exceeding expectations. They brought in a total of 40,410 guests, including 29,878 tourists and 10,532 crew members. During the November 2022-May 2023 season, a total of 33 cruise vessels were scheduled to call at Kochi, of which 20 were foreign ones, said official sources.

“Foreign cruise vessels resumed calling at Indian ports from November 2022. On its part, the Ernakulam District Tourism Promotion Council (DTPC) operated a prepaid taxi and auto counter on Tuesday, arranging more than 400 vehicles for the cruise tourists. Over the years, cruise vessel operators preferred Kochi to other Indian cruise ports in view of the affable behaviour of all stakeholders. An area measuring three acres in front of the cruise terminal has been developed for parking vehicles [luxury coaches, prepaid autos and taxis] to ferry guests who arrive in cruise liners,” the sources added.

To provide variety in shopping experience for cruise passengers, an experience zone named ‘Kochi Haat’ — a replica of ‘Delhi Haat’ — will be set up on 71.50 cents opposite the cruise terminal, where local artisans and vendors will get an opportunity to sell handicrafts, ethnic and Ayurveda products, apparels, and spices.

The slew of cruise-tourism-friendly business initiatives of the Cochin Port Authority has led to Kochi emerging as the most-preferred cruise destination in India. The port city figured prominently in the cruise itinerary of major cruise lines like Carnival Cruise Lines, Royal Caribbean International, and their sister affiliates, said the sources.