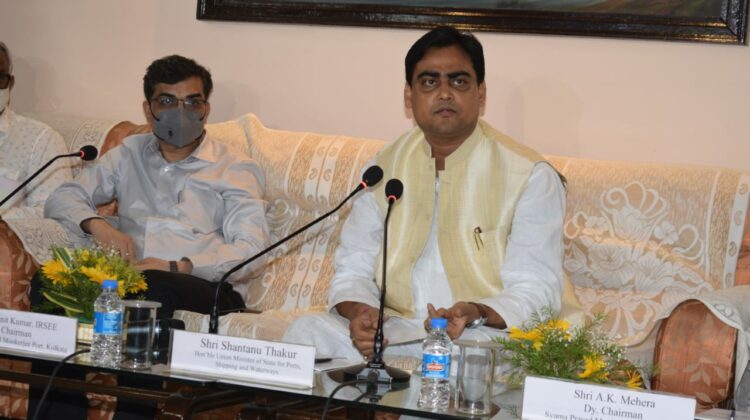 KOLKATA : Union Minister Shantanu Thakur on Monday said constructing a port without the Centre’s support is not possible due to requirement of huge associated infrastructure such as railways and offered the West Bengal government to develop the Tajpur deep sea port project jointly.

State Chief Minister Smt Mamata Banerjee had earlier announced that the state government will execute the Rs 15,000-crore greenfield port project in Purba Medinipur district on its own in the PPP model claiming that the Centre has been “inordinately delaying” it, a charge denied by the Kolkata which was the project partner on behalf of the Union government.

The state government can build the port if it wants. However, it is not possible to do it without the cooperation of the Centre. There are railways and many other related things. The chief minister should understand the need to build the port in partnership with the Centre, Minister of State for Ports, Shipping and Waterways Shantanu Thakur told reporters.

To a question, he said the Centre had made a proposal to the state on building the port jointly but did not get an answer.

In December last year, the West Bengal Maritime Board called for letters of intent from firms interested in the port.

The West Bengal Industrial Development Corporation earlier claimed that several Indian and foreign companies such as DP World and Port of Singapore had shown interest in the letter of intent for the construction of the deep-sea port at Tajpur.

However, Covid disruptions are delaying the process, WBIDC officials had said. Meanwhile, Thakur on Monday inaugurated various projects of the Kolkata Dock System.

Out of all the projects undertaken by the Centre for the development of Kolkata Port, projects valued at Rs 525 crore have already been implemented, port officials said.

The Syamaprasad Mookerjee Port (Kolkata Port) plans to hand over a part of the Khidirpur dock to a private company in PPP model.

Its chairman Vinit Kumar said, “Five consortiums from home and abroad have shown interest in the RFQ (request for quotation). We hope to get a request for a proposal from them within a month. If all goes well, we will hand over one-fourth of the Khidirpur Dock to the private sector in the PPP model within two months.”

Kumar said the Kolkata Port authorities will receive Rs 40-50 crore a year in royalties from the handed over one-fourth part of the dock. At present, the annual income from the entire Khidirpur dock is Rs 60-70 crore.

Private partners will have to invest around Rs 200 crore to build the infrastructure and other facilities for loading and unloading containers.