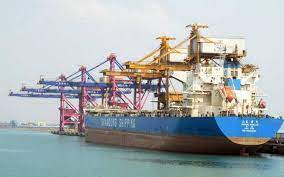 The privatisation of Berth No 9 into a container terminal at a cost of Rs 434.17 crore will boost VOC Port Trust’s container handling capacity by 6 lakh twenty-foot equivalent units (TEUs) a year.

The two terminals handled a combined 762,000 twenty-foot equivalent units (TEUs) in FY21 compared to 804,000 TEUs in the previous year.

The successful bidder will be required to convert the 334.5 metre berth into a container terminal that can accommodate 8,000-TEU capacity ships at a depth of 14.2 metres. About 10 hectares of back up area will also be handed over to the private operator.

The successful bidder will be responsible for developing the container yard, construction of terminal road and fencing, erect container handling equipment such as three rail mounted quay cranes, nine rubber tyred gantry cranes, one reach stackers, 18 tractor trailers, IT systems and other works for successful completion and operation of the terminal.

The terminal will be awarded to the bidder quoting the highest royalty per TEU to VOC Port Trust.

Bidders have time until June 16 to submit their qualification papers.

The conversion of Berth No 9 into a container handling facility is part of a road for the port’s transition into a transshipment hub by 2025.

VOC Port Trust also plans to convert berths 1,2,3 and 4 into container terminals to handle 1.76 million TEUs with an investment of Rs2,696 crore.

Another 4.1 million TEUs capacity will be created in the port’s outer harbour with an investment of Rs3,744 crore.

Currently, nearly 75% of India’s transshipped containers are handled at ports outside India such as Colombo, resulting in $80-100 per TEU higher cost to exporters and importers.

Routing containers via other hubs makes Indian industries vulnerable to increase in costs, logistic inefficiencies, congestion issues, and creates long term risks for India’s trade competitiveness, according to the Maritime India Vision 2030, a ten-year blueprint drafted by the government.

The share of Indian cargo transhipped in Indian ports should be raised to over 75% from about 25% by 2030 to save the extra port handling charges incurred at the transshipment hubs, the document said.