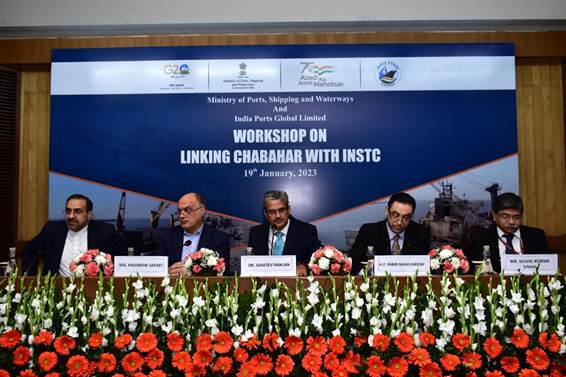 MUMBAI : Ministry of Ports, Shipping and Waterways, GoI, in association with India Ports Global Ltd, conducted a workshop on the ‘Linking Chabahar Port with INSTC’ in Mumbai. The International North–South Transport Corridor (INSTC) is a multi-modal transportation route linking the Indian Ocean and the Persian Gulf to the Caspian Sea via Iran and onward to northern Europe via St. Petersburg in Russia.

The INSTC envisages the movement of goods from Mumbai (India) to Shahid Beheshti Port – Chabahar (Iran) by sea, from Chabahar to Bandar-e- Anzali (an Iranian port on the Caspian Sea) by road, and then from Bandar-e- Anzali to Astrakhan (a Caspian port in the Russian Federation) by ship across the Caspian Sea, and after that from Astrakhan to other regions of the Russian Federation and further into Europe by Russian railways were highlighted by the speakers during the workshop.

The strategic location of Chabahar has a great advantage for developing it as a transshipment hub. The Port’s deep draft of 16 m is suitable for handling large shipment vessels. The Port lies close to some of the busiest trade routes in the world. The region comes under the Asia-Europe, Asia-Asia trade route, which carries large cargo volumes.

INSTC (International North-South Transport Corridor) is India’s vision and initiative to reduce the time taken for EXIM shipments to reach Russia, Europe and enter the central Asian markets. Successful activation of the corridor will help connect India to Russia and Central Asian countries. The Chabahar Port, located in Iran, is the commercial transit centre for the region, especially Central Asia.

The workshop concluded with a vote of thanks, presented by the Director of Operations, IPGL