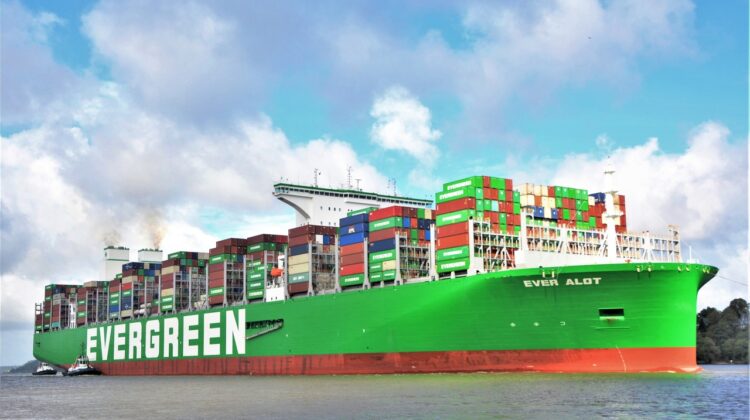 MUMBAI : Prime Minister Narendra Modi’s goal of making India the world’s factory risks being held back by the country’s inability to attract bigger container ships due to inadequate port infrastructure.

Most harbors along India’s coast aren’t deep enough to handle vessels like the EVER ALOT the world’s largest boxship at 400 meters long and with a capacity of more than 24,000 TEUs (twenty-foot equivalent units). Neighboring Sri Lanka as well as Malaysia have in recent months received visits from the EVER ALOT which can rival the Empire State Building in length.

India’s biggest state-run container handling facility, Jawaharlal Nehru Port Trust, lacks the 17-meter draft needed for such vessels to navigate. One facility that has said it can handle the behemoth — Mundra Port, operated by billionaire Gautam Adani’s conglomerate — has so far been skipped. The 17,292-TEU APL Raffles is the biggest vessel to have berthed in January 2022 with 13,159 TEUs on board.

“Ultra-large ships provide economies of scale,” said Shailesh Garg, a Director at Drewry Maritime Advisors. “However, increasing the vessel size alone will not help in speeding up the movement of goods to and from the hinterland.” Road and rail links from ports to warehouses, factories and shops also need to be improved, he said.

Poor shipping connectivity has hindered India’s integration into the global value chain, according to a Reserve Bank of India report in 2022. The country scored 34% in the GVC participation index compared to 45.9% for the 10-member Association of Southeast Asian Nations, the RBI said. Vietnam was above 50% in the gauge, according to a separate report.

Mundra Port hosted APL Raffles three years after Vietnam welcomed a similar-class ship, illustrating how Asia’s third-largest economy risks falling behind in the competition for a bigger share of trade as businesses move away from China. Mundra is India’s highest-ranking port in terms of performance, sitting at 48th in an index compiled by the World Bank Group and S&P Global Market Intelligence.

Weak infrastructure is undermining Modi’s target to lift the share of manufacturing to 25% of gross domestic product from 14% and increase the nation’s slice in global goods exports to 3% by 2027 and to 10% by 2047, up from 2.1% now.

“Development of maritime capacity will be key to competing with China and other emerging manufacturing hubs in Southeast Asia and other regions,” said Drewry’s Garg. “China has a far more developed and efficient port and logistics infrastructure.”

While only 0.7% of the operational global container fleet is comprised of vessels with a draft of 17 meters or deeper, these larger ships are becoming more vital to Europe and China trade. That’s a route that India can be part of given its strategic location between the Suez Canal and the Strait of Malacca.

Vizhinjam Port in south India’s Kerala is a deep-sea facility with a natural draft of 20-24 meters, so it is capable of attracting bigger ships. It is expected to be operating by 2024, said Roy Paul, a spokesman for Adani Group, which is developing the project.

Vadhvan port in Maharashtra that has a natural draft of 18 meters is expected to be completed in 2028, according to the government’s Maritime India Vision 2030.