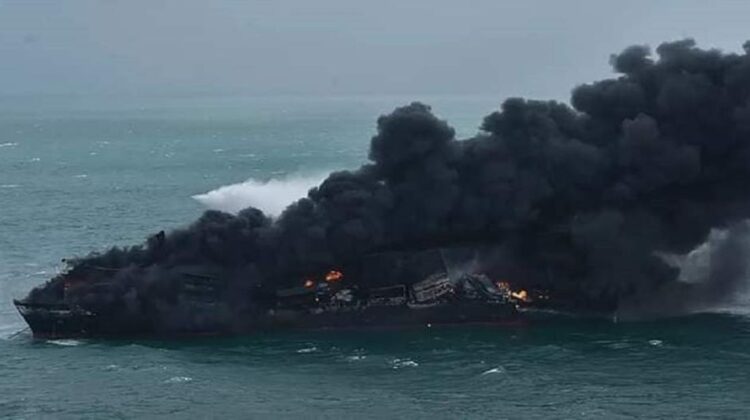 COLOMBO : Sri Lanka’s top environment body has warned and asked people to be vigilant in case of inclement weather.

There could be slight acid rains due to the emission of nitrogen dioxide from the Singapore-flagged cargo ship which caught fire near the Colombo beach last week.

The cargo vessel – MV ‘X-PRESS PEARL’ – was carrying a consignment of chemicals and raw materials for cosmetics from Hazira in Gujarat to Colombo Port.

It caught fire 9.5 nautical miles from the coast in Colombo, where it was anchored outside the Port of Colombo on 20th of May.

Apart from the 325 metric tonnes of fuel in its tanks, MV X-Press Pearl was loaded with 1,486 containers carrying about 25 tonnes of hazardous nitric acid.

Chairperson of Marine Environment Protection Authority (MEPA) Dharshani Lahandapura said that the blaze has been brought under control to a great extent and the authority is taking all appropriate measures to conduct beach clean-up procedures as soon as possible to avert the risks of pollution caused due to the fire in the cargo ship.

Lahandapura said, they are closely monitoring the situation and there is no sign of any oil spill.

All 25 crew members of the ship – of Indian, Chinese, Filipino and Russian nationality – were rescued on Tuesday after a fire alarm dispatch was sent.