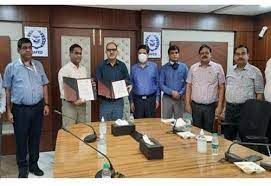 According to the MoU, the key areas of cooperation include facilitating APEDA registered exporters getting assistance under all the Govt. of India schemes implemented through NAFED. The MoU also envisages ensuring sustainability and growth of exports by Cooperatives by addressing issues such as technology, skill, quality products and market access.

The collaborations between APEDA, which functions under Ministry of Commerce & NAFED, registered under the Multi State Co-operative Societies Act, also support engaging Cooperatives involved in agricultural production for improving the quality of agri-produce and its consolidation for better price realization to the farmers.

APEDA would facilitate exports by the Cooperatives, FPO’s, partners and associates identified and promoted by NAFED.

APEDA and NAFED will also facilitate participation of Farmers’ Cooperatives in global trade including B2B & B2C fairs to be organized in India and abroad and also to mutually cooperate in international business development & promotions.

The MoU also entails providing assistance towards capacity building of Cooperative Societies, Self-Help Groups (SHGs) for their social & environmental compliances and skilling as per international standards. Both the organisations would organize awareness programs Skill Development Programmes and Workshops at Regional, State and National levels.

APEDA and NAFED have also agreed to work in close coordination towards sustainable Cluster development of the clusters in various States notified under Agri Export policy.

The MoU was signed by Dr. M. Angamuthu, Chairman APEDA and Mr. Sanjeev Kumar Chadha, Managing Director, NAFED. The MoU was signed for utilising both the organisations’ expertise by mutually working together to synergize the activities in the interest of agriculture and allied sectors for bringing better value to the stakeholders.

APEDA has been focusing on collaborative approach to bring synergy with number of organisations and institutions having inherent professional and specialised expertise in different areas for capacity building of various stakeholders and providing solutions for addressing some of the identified interventions for the development of Agriculture and its export enhancement in consonance with the objectives set under Agri Export Policy (AEP) announced by Government of India in 2018.

AEP was framed with a focus on agriculture export oriented production, export promotion, better price realization to farmer and synchronization within policies and programmes of Government of India. It focuses on “Farmers’ Centric Approach” for improved income through value addition at source itself to help minimize losses across the value chain.

APEDA has been engaged with State Governments for the implementation of AEP. The States of Maharashtra, U.P., Kerala, Nagaland, Tamil Nadu, Assam, Punjab, Karnataka, Gujarat, Rajasthan, Andhra Pradesh, Telangana, Manipur, Sikkim, Uttarakhand, M.P., Mizoram and Meghalaya have finalized the State specific Action Plan for exports while the action plans of other States are at different stages of finalization.

At present, NAFED is creating a network of honey FPOs across Jammu & Kashmir, Punjab, Haryana, Rajasthan, Madhya Pradesh and Uttar Pradesh. Around 65 FPOs will be part of honey corridor linking north-west to north-eastern regions. NAFED is aiming at bringing all the FPOs associated with honey production for creating requisite infrastructure under the National Beekeeping and Honey Mission, NAFED’s  subsidiary Federation of Indian FPOs and Aggregators (FIFA) is currently partnering with FPOs and private sector.