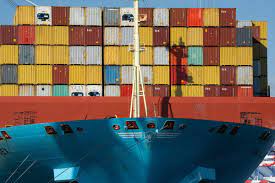 LONDON : The combination of Covid-related port closures and the significant increase in trade volumes is choking up shipping terminals globally and with the Christmas season on the horizon there might not be much improvement soon.

“We expected that things would start to ease during the second quarter but then we had the situation in Suez with the Evergiven, now we have a situation in Yantian, and we keep on seeing Covid impacts and congested terminals,” according to Lars Mikael Jensen, head of global Ocean network at Maersk.

While Maersk sees the situation at Yantian Port in Shenzhen slowly recovering with productivity at 45% of normal, that still means at average waiting time of 16 days per vessel, the company said Friday.

The delays due to the Covid-19 outbreak at Yantian port is limiting capacity by about 25,000 twenty-foot containers a day, compared with 55,000 TEU a day during the Suez congestion, according to a report from Sydbank Senior Analyst Mikkel Emil Jensen. However, the congestion at Suez lasted for about 6 days, whereas the Yantian-related problems have continued for more than two weeks, he wrote last week.

Once the partial shutdown ends, it will take time to fix the bottleneck, just as it took weeks for global shipping to recover after the Suez Canal was cleared. Even without the logistic issues, the demand for shipping continues to be incredibly strong, pushing the cost of moving a container to record levels.

China’s trade boom shows no sign of letting up, with exports the third-largest on record in May. In addition, the third and fourth quarters are historically the biggest periods for trade in any given year, as companies in the U.S., Europe and elsewhere stock up ahead of Christmas. With those areas reopening as the pandemic subsides there and stimulus payments boosting incomes, that trend looks set to continue.

“We are hearing from a lot of customers that they expect continued strong volume shipments also through the second half of the year,” Maersk’s Jensen said last week. “The Christmas season is starting, and I think the trend that we’re seeing with customers is that a number of them will actually start the shipment of their Christmas season earlier” than the usual August-September period, he said.