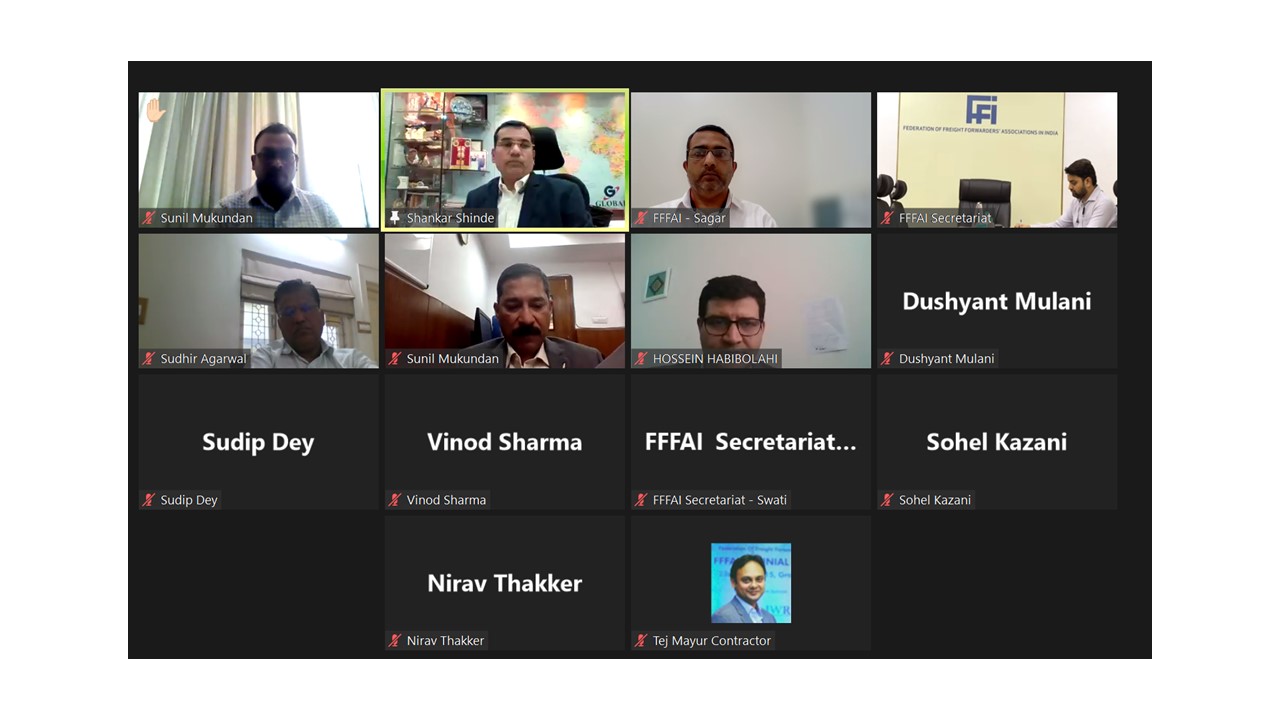 MUMBAI : On January 18, 2023 the Federation of Freight Forwarders Association (FFFAI) conducted a Webinar to share important developments on new routes from India to CIS countries under International North South Transport Corridor (INSTC) and how it can open new opportunities for the EXIM community. The webinar was addressed by Mr. Shankar Shinde, Chairman FFFAI and Mr. Sohel Kazani, Executive Committee Member, FFFAI to present the recent developments on INSTC route. Mr.Sunil Mukundan, MD, Indian Global Ports; Mr.Hossien Habibolahi, MD, India Ports Global CFZ and Mr.Shailesh Makawana, Indian Ports Global also made presentations at this webinar to provide details on the progress of Chabahar Port.The webinar was attended by a large number of FFFAI Members and logistics professionals from across the country.

Mr. Sunil Mukundan and Mr. Shailesh Makwana highlighted the facilities and benefits available at Shahid Beheshti Port of Chabahar Port, its advantages as a transit point and incentives/discountschemes on warehousing and terminal handling charges.

At this webinar the FFFAI Chairman appealed members to participate on movements through INSTC for CIS/ Russia destination which can also be further compliment European destinations. He also urged to take benefits of discounted charges by Port JNPT / Kandla & Shahid Beheshti Port (which is an Indian Port) viable to be utilized by the Exim trade people. In this new opportunity sector the Logistics service providers should operate on untapped markets .This is pertinent to mention that FFFAI has done a study on the viability of INSTC Route and Chabahar Port with TIR, which has been submitted to the Government of India.

Mr. Sohel Kazani highlighted the new developments on the INSTC route in terms of increase of volume, movements of vessels, corrections in freight charges and decreasing costs. Also there are new developments in the banking sector concerning this route. Mr. Kazanialso emphasised onthe recent developments after the new political regime in Afghanistan under Talibans.

• Participation of New Vessels operators provides regular service to IRAN
• Banking :Yes Bank and UCO Bank have formed a partnership with two Russian banks. Through this deal, both of these institutions will get India closer in conducting business with Russia.
UCO Bank has partnered with Gazprom Bank, while Yes Bankhas also formed an arrangement with Commercial Bank ofMoscow in Russia.

• FIATA Bill of Lading through FFFAI are made available to members :Negotiable FIATA Multimodal Transport Bill of Lading (FBL) are now available in a secured digital format through TMSs and other platforms.

Mr Vinod Sharma, concluded the webinar by proposing vote of thanks to the Chairman FFFAI and all other speakers/dignitaries for sharing their deep insights and valuable information on port development and connectivity. He also thanked all participants for showing their keen interest in exploring the INSTC route.