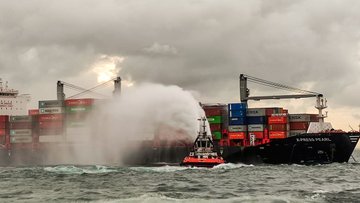 COLOMBO : A fire erupted on the 2,743 teu X-Press Pearl yesterday afternoon off Colombo. The ship, which was carrying around 25 tons of nitric acid among is cargoes, radioed for help and the Sri Lankan navy dispatched a number of vessels to douse the severe blaze at an anchorage 9.5 nautical miles from Colombo port. Owners X-Press Feeders had only taken delivery of this ship in February this year.

Sri Lankan authorities were able to board the ship last night and they have suggested the fire started from a reaction to the chemicals being transported on the boxship.

There have been no reports of injuries. Naval vessels remain in close proximity, dousing the ship.

“Currently the fire has been brought under control,” a spokesperson for the navy said this afternoon.

“It is too early to conclude that the fire is completely out. So our units are on standby. There is heat due to the steel environment,” he added

srilanka_navy in coordination with SL Ports Authority exerting itself to get developments under control, following the fire broke out onboard MV X-PRESS PEARL at anchorage off Colombo harbour on 20 May 2021.