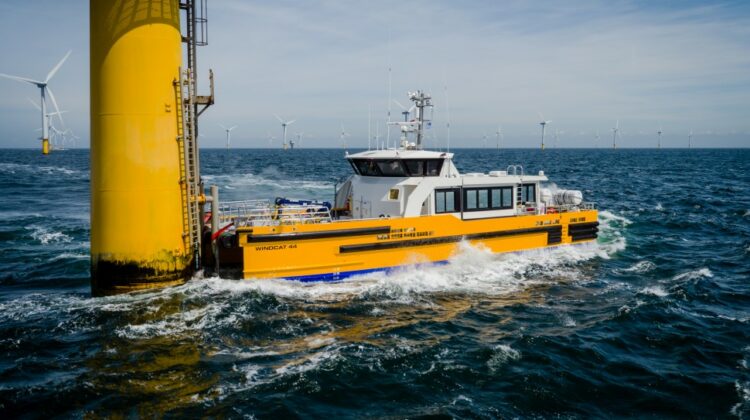 Five UK projects revolving around decarbonisation of the maritime sector by using offshore wind solutions have won GBP 3.3 million (around EUR 3.9 million) through the Clean Maritime Demonstration Competition, funded by the UK Department for Transport and delivered in partnership with Innovate UK.

LONDON : One of the Competition’s flagship projects is a feasibility study into establishing a National Clean Maritime Demonstration Hub in ABP’s Grimsby docks – the world’s largest offshore wind operations and maintenance (O&M) port, according to the Offshore Renewable Energy (ORE) Catapult, which is leading the project and is also either leading or is a consortium partner in the other four initiatives.

The project developing offshore wind on-turbine electrical vessel charging system will design, build, and test an electric charge point situated on a wind turbine. This approach will access the infrastructure already in place (turbine platform, electrical cables) to provide renewable electricity to vessels. As an eCTV ‘docks’ with the turbine a cable reel will lower down an electrical charge connection which will plug in to the vessel and charge a battery on-board.

AMC’s project project will complete a detaileld design and operational simulation of a mothership charging vessel, hosting a number of electric CTV’s. The mothership will take the concept of in-field charging and provide a flexible solution capable of removing diesel emissions from offshore wind Operations and Maintenance.

Furthermore, Concept Systems Ltd (CSL) has been awarded funding to investigate data-led emissions management and Artemis Technologies will be supported in further developing its eFoiler technology.

ORE Catapult says the five projects will also convene industry, the supply chain, and the government to address the policy, commercial, regulatory, and technical barriers to achieving maritime decarbonisation.

“The decarbonisation of the UK’s maritime fleet is essential if we are to achieve Net Zero by 2050 and transitioning to a future of zero-emissions shipping with clean vessels and alternative fuels is vital”, ORE Catapult stated in a press release from 15 September. “As both a potential producer and user of clean fuels, the UK’s offshore wind industry is in a unique position to act as a springboard for that broader maritime decarbonisation”.