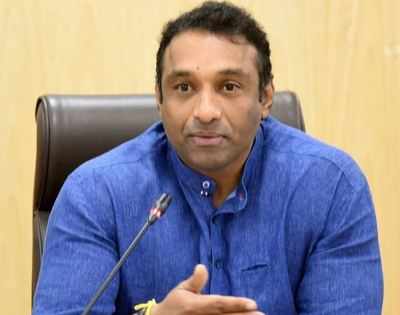 ‘Goal is to achieve holistic and sustainable development by converging resources’

VIJAYWADA : Minister for Industries and Information Technology Mekapati Goutham Reddy has said that the State government is investing in the development of infrastructure, particularly sea and airports and multimodal logistics parks, and doing an overhaul of the business processes to achieve a higher growth rate.

“Emphasis has been laid on the job creation, healthcare, education and women empowerment, besides support the Micro, Small and Medium Enterprises (MSMEs), the Minister said while addressing a virtual conference on ‘India @ 75 – Prospects & challenges for accelerating growth’ organised by the Confederation of Indian Industry (CII) on Wednesday.

Mr. Goutham Reddy said the government has embarked on a journey of holistic and sustainable development through convergence of human, physical and financial resources.

“Each district is being considered as a resource unit. Efforts are on to double productivity of exports hub, expansion of markets and creation of jobs with focus on value addition. Potential exportable commodities have been identified for each district,” said the Minister.

An assessment of industrial and transport infrastructure including warehousing, roads and railway connectivity and facilities required at seaports and cargo facilities at airports is being done to bridge the gaps, he said. Market intelligence was being strengthened for key products. “A ‘buy from A.P.’ campaign will be launched for importers to understand their requirements. Apart from this, a single desk for exports is being established to cater to the needs of exporters,” said Mr. Goutham Reddy.

A State Logistics Coordination Committee has been formed to deal with trade infrastructure and ensure that the cost of moving cargo through the State is not exorbitant.

Mr. Goutham Reddy also said that the government had constituted a taskforce to attract investments and liaise with investors. Industrial and electronics policies have been introduced with a focus on attracting large-scale manufacturing units, he added.