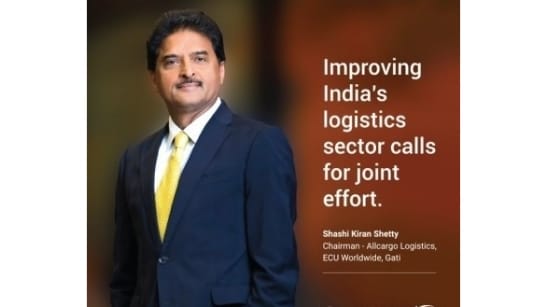 MUMBAI : The draft logistic policy has set ambitious targets. The Central/State govts and the logistics operators have a role to play in achieving them

It would be an understatement to stress that the current pandemic sweeping across the country has brought to light the critical importance of having an efficient and robust logistics network. Borrowing an analogy from Amartya Sen’s Poverty and Famines: An Essay on Entitlement and Deprivation’ that stressed that famines don’t happen because there is a lack of food but rather because of the “inability to establish entitlement for enough food” — the oxygen crisis that gripped the NCR was not so on account of lack of oxygen but was because it could not be reached to the people on time.

There’s no denying that moving oxygen and other critical equipment takes time. However, an efficient logistics network would reduce that time to bare minimum. For instance, although we have been able to ramp up oxygen manufacturing since, we don’t have enough cylinders or cryogenic containers to transport them to the place of consumption.

The network of the global logistics industry, which is estimated to be around $12 trillion, is what keeps the interdependent global economy moving and growing. But a temporary glitch — like in the recent Suez Canal incident — in the logistics supply chain, such as disruptions caused by delay in vessels and containers turnaround, has led to serious shortage of space on ships and, hence, an exponential increase in ocean freight rates. All these call for better preparedness for supply chain disruptions because the more inefficient the system, the more it costs economies.

Can raise the bar

That said, India has the ability to compete with China and other Asian countries. The government must ensure the interest of Indian trade is served in order to achieve its GDP growth aspirations as well as protect India’s manufacturing brand which, as of today, may not match global standards.

In December 2019, the government announced a proposal to bring out a holistic national logistics policy (NLP). The policy’s prime objective was to bring down cost of logistics from the existing 14 per cent of GDP to 9 per cent. That can only be achieved if the performance of the constituents that go into forming the logistics sector improves. The World Bank’s Logistics Performance Index (LPI) indicates the robustness of a country’s logistics sector. The policy aimed to improve India’s ranking within the range of 25-30 over the next five years.

The overall LPI ranking is arrived at on the basis of rankings on six different parameters: efficiency in customs, good supporting infrastructure, competitively priced international shipments, logistics competence, efficient tracking and tracing, and the timeliness of shipments reaching destinations.

India moved from Rank 54 in 2014 to 35 in 2016 — this was largely on account of improvements in parameters related to customs as well as infrastructure. However, it dropped to 44 because its performance rating on these two parameters also dropped. So retaining the rankings is as important as improving the rankings.

Towards this end, the draft proposal identified five pillars for attention which includes focus on: integrated services, multimodal transport, logistics for core sectors, logistics for international competitiveness and logistics for emergencies and disasters. It is also understood that a new central legislation (LEAPS Act) is being contemplated to enable improvement in the logistics network. Here a proposed one-nation, one-contract, one-form will be a welcome move which will improve the ease of doing business, and thereby bring efficiency.

However, what is critical in any improvement is the involvement of all stakeholders. While the Central Government has a role, the State governments and even the logistics operators have an equally important role for facilitating the change to bear fruition. Hence, they all have to act in unison. Otherwise, the gain in one parameter, say customs efficiency, can be offset if one falls behind on, say, parameters such as timely delivery to a destination.

One important aspect here is that the government must not intervene in setting pricing controls as these are best left to market forces. Also, the government must maintain its distance and allow industry bodies to self-regulate. While outlining the policy, the government must consider the big picture and radically change the mindset to build massive logistics infrastructure through the private sector only.

It is good that the government has set an ambitious target through the logistics policy. The idea and the challenge should be to sustain it.

The writer is Founder-Chairman of Allcargo Logistics