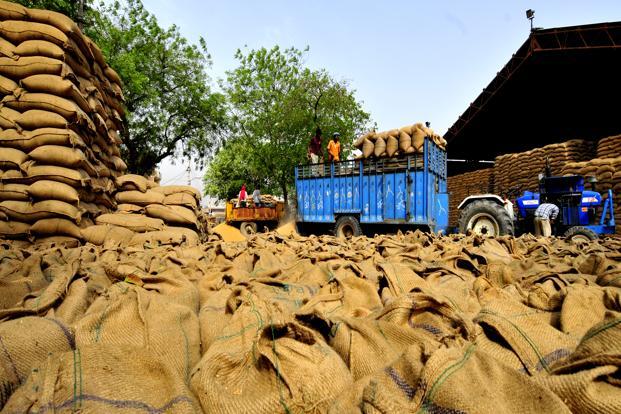 NEW DELHI : India’s wheat exports have hit a roadblock over the past few weeks as the coronavirus pandemic has forced shutdowns and impacted key operations across the country, sources told.

Apart from emerging bottlenecks at several key ports of India, like Kandla, Mumbai’s Jawaharlal Nehru Port, and Visakhapatnam, the industry is witnessing disruptions on the supply side as most major grains markets are shut.

Key trade centers in Madhya Pradesh and Rajasthan, major growers of the staple food grain, have been shut for weeks, traders said.

“With major markets shut, supply has tightened in open markets and prices are rising,” a trader based in Indore, Madhya Pradesh, said.

As supply turns scarce across markets, exporters are also facing difficulties in sourcing the grain for outbound shipments as logistical bottlenecks are creating hurdles, an official with a global food firm said.

“At times it is difficult to find vehicles to transport the commodity from different states. It will start impacting exports soon, if the restrictions continue for long,” Delhi-based exporter Anand Goyal said.

So far, Indian traders have signed deals to export 200,000 mt over the next few months, trade sources said.

Most of the wheat is expected to ship to Bangladesh and Nepal, they added.

“If the logjams continue for the next few weeks, it will become difficult to export,” Bangalore-based exporter Pramod Kumar said.

India, the world’s second-largest wheat producer, was unable to export significant quantities of wheat for several years because its wheat prices were higher compared with other global suppliers due to higher domestic prices. However, given the climb in global wheat prices as inventories had slumped to a two-year low, India finds itself in a position to export wheat.

“However, with the difficulties that exporters are facing now, it may dent annual exports by 5% to 10%,” the official with the multi-national firm said.

With most major markets shut, Indian farmers are selling their produce to the government at a price higher than prevailing market rates, they said.

In the current marketing year that started in April, the government has bought 38 million mt of wheat, 21% higher than last year, data showed.

“The government purchases are rising sharply from last year. This will also limit supply for exports and might lead to a rise in the average export prices,” Goyal said.

Domestic exporters anticipate they may also have to turn to the government to source for grain and it will eventually increase viable export prices.

“Both these prices are sharply higher than the prevailing market prices. In major markets the price is much lower,” Goyal added.

“If exporters have to purchase the wheat from the government it will become expensive,” another Bangalore-based exporter said.