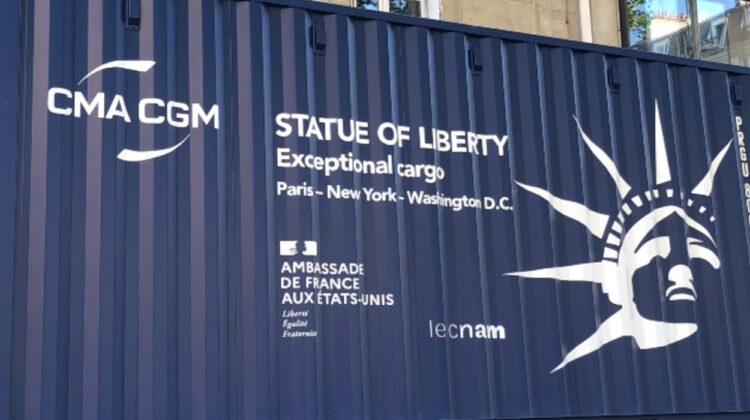 135 years after “The Statue of Liberty Enlightening the World” was unveiled on Liberty Island, another statue of Lady Liberty is set to cross the Atlantic.A major partnership between the Embassy of France in the U.S., the Conservatoire national des arts et métiers (Cnam) and the CMA CGM Group to celebrate freedom, French American friendship.The 9-foot, bronze statue will be displayed on Ellis Island on Independence Day before being installed outside the French Ambassador’s residence in Washington, D.C. on Bastille Day (July 14).

PARIS : The Embassy of France in the U.S., the Conservatoire national des arts et métiers (Cnam) and the CMA CGM Group, a world leader in shipping and logistics, are partnering to bring another emblematic treasure and symbol of freedom to the United States. Arriving in New York City for Independence Day and in Washington, D.C. for Bastille Day, the 9-foot, bronze statue of Lady Liberty is was made from the original plaster model of 1878 by Auguste Bartholdi, currently exhibited at the Museum of Arts and Crafts in Paris.

The statue of Lady Liberty, crafted by a French foundry using a lost-wax method, was uninstalled today during a small ceremony at the Cnam, where she had been on display at the entrance, welcoming guests for the past 10 years. The 1,000-pound statue will be placed into a specially designed plexiglass case before being put into a dedicated, branded shipping container.

On June 19, the statue will board the CMA CGM TOSCA (an 8,500 TEUs shipping vessel) in Le Havre. She will then travel by sea, reaching New York City after a nine-day crossing of the Atlantic Ocean.

She will be on display on Ellis Island from July 1-5, facing her sibling to celebrate Independence Day, thanks to a cooperation with the Statue of Liberty-Ellis Island Foundation and the National Park Service.

She will then be transported by road by CEVA Logistics, a subsidiary of the CMA CGM Group, to her final destination, the French Ambassador to the U.S.’s Residence in Washington, D.C., where she will stand starting July 14, on Bastille Day, as a symbol of the strong, longstanding French-American friendship.

A symbol of freedom to enlighten the world

The arrival of the new Lady Liberty statue will celebrate the most central value of the French-American partnership: freedom.

The technological, artistic, and logistics challenges to bring this new statue to America tell a modern tale of successful international cooperation.

To celebrate this unique voyage and the friendship between France and the United States, the “Vive la Liberty” adventure will be available for everyone at https://franceintheus.org/ViveLaLiberty

Follow the #ViveLaLiberty adventure on the social media platforms of the Embassy of France in the U.S. @franceintheUS, the Cnam and CMA CGM for a chance to win a LEGO® Architecture « La Statue de la Liberté », a free subscription to the Albertine© library and many other gifts.