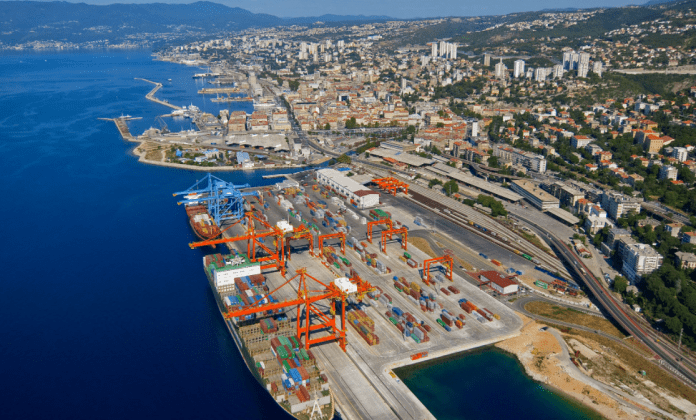 A.P. Moller-Maersk is continuing to move forward with its business strategy designed to build the company’s logistics operations as part of the plan to expand as a full-service supplier to shippers. Last week, through its APM Terminals operation, the company announced two further terminal projects focusing on expanding operations in Eastern Europe and the Middle East.

APM Terminals and Croatian company ENNA formalize a project for the design, construction, and operation of the new container terminal in the Croatian port of Rijeka that the companies said will serve as a new gateway to Central Europe able to handle the world’s largest containerships. Earlier in the week, Maersk signed an agreement with Saudi Ports Authority Mawani for the development of a new integrated logistics park at the Jeddah Islamic Port in Saudi Arabia.

“For APM Terminals, development of this new facility is in line with our newly launched strategy of “Safer, Better, Bigger”. We want to grow our business where it makes sense and where our customers need us, and this is clearly the case with Rijeka”, shared APM Terminals CEO Morten Engelstoft.

Development of the container terminal operation in Rijeka began more than a decade ago with the support of the World Bank. The first part of the deep-sea container port was dedicated in 2019. Under the agreement, the two companies will form a joint venture owned 51 percent by Maersk that will have a 50-year concession for the operation of the Rijeka Gateway.The agreement ceremony were attended by Croatian Prime Minister Andrej Plenković and Minster of Sea, Transport and Infrastructure Oleg Butković,

The agreement calls for the development of the facility in two phases with the first portion expected to be operational in three and a half years. After the completion of Phase 2, both phases together will have a projected throughput of 1,055,000 TEU. The first phase includes a 1,300-foot berth that will be expanded to 2,230 feet during the second phase. Initially, there will be two ship-to-shore cranes with a third added during the second phase. The cranes, the largest currently available in the market, will give the Rijeka Gateway the capability of serving vessels of up to 24,000 TEUs.

Another important feature of the new terminal will be an expanded rail connection with the hinterland, linking Rijeka not only with the rest of Croatia but also with neighboring markets.

“Rijeka Gateway and the modernization of the railway infrastructure is Croatia’s largest national project that will connect the Port of Rijeka with continental Croatia and Central European countries, facilitating business opportunities and fast economic growth not only in logistics but in all services and all industries,” said Pavao Vujnovac, President of the Board, ENNA Group.

The agreement in Saudi Arabia is for a greenfield project that is the first of its kind in the Kingdom designed to create an infrastructure for warehousing and distribution, cold storage, e-commerce and serve as a hub for transshipments, petrochemical consolidation, air freight, and cargo. The agreement anticipates an investment of over $136 million with a 25-year operating life.

They cited the strategic location on the Jeddah port along the Red Sea coast. It is the largest port in terms of volume and cargo handling in Saudi Arabia handling over five million TEU including over two-and-a-half million TEUs transshipped through the Jeddah Islamic Port every year.

Maersk has expanded its operations to encompass 130 countries including 75 terminals. The company’s strategy s to continue to expand the portion of its operations in the coming years.