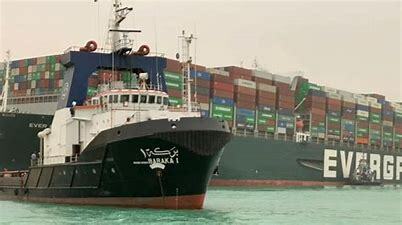 The mega container Ever Given got wedged on March 23 in a single-lane stretch of the canal near the city of Suez, about 6 kilometres north of the southern entrance of the canal.

In a sign of relief to the Suez Canal crisis on its fifth day, transit service providers of the canal have informed ship owners that the mega container ship Ever Given that ran ground after losing control was partly refloated and have already shared the Suez Canal Authority’s (SCA) plan to clear the traffic jam of cargo vessels.

Once Ever Given clears the channel in towage position, SCA is expected to arrange quick transit for 133 vessels stuck in the traffic jam, shipping owners were informed by transit service providers. “Suez Canal Authority announced that the mega container ship Ever Given presently at SC K/M 151 was partly re-floated from the aft side, vessel rudder (a device used for steering and manoeuvring a vessel) now is free,” said Wilhelmsen Ships Service that manages transit operations in Suez Canal to owners of the ships that are stuck on both sides of the canal.

The mega container got wedged on March 23 in a single-lane stretch of the canal near the city of Suez, about 6 kilometres north of the southern entrance of the canal. “The Suez Canal tugs still assisting to float the vessel completely in order to tow direct to port of Suez’s outer anchorage area,” the letter said. Still the process of clearing the route may take time as the SCA will have to clear between 15,000 and 20,000 cubic metres of sand to reach a depth of 12-16 metres and refloat the ship completely. Already tug boats and dredgers are being used by SCA to clear the logjam.

As per estimates, around 12 percent of the global trade passes through the 193-km long canal, which is the shortest sea link between Asia and Europe. According to media reports, around 280 ships are in a maritime traffic jam on both sides of the canal.

To clear the 133 vessels, the SCA has arranged an elaborate transit plan for ships, according to the letter. “The 43 vessels presently stuck in the Great Bitter Lakes will resume transit, clearing canal from Suez end as soon as possible. At the same time, 45 vessels from Port Said will transit with the Southbound convoy. From Suez Port, 45 vessels will transit canal with the North Bound convoy direct to Port Said,” the letter said. Great Bitter Lake is the widest part of the Suez, because of which the Egyptian authorities had instructed a large share of the ships to anchor in that region.

On an annual basis, around 18,800 ships pass through the canal carrying around 1.17 billion tonnes of cargo. Hence, a prolonged closure of the canal is expected to affect the global trade, spiking shipping rates, container rates and also increasing the travel time between Europe to Asia. The 400m-long, 200,000-tonne vessel ran aground owing to high winds and a sandstorm that affected visibility.​