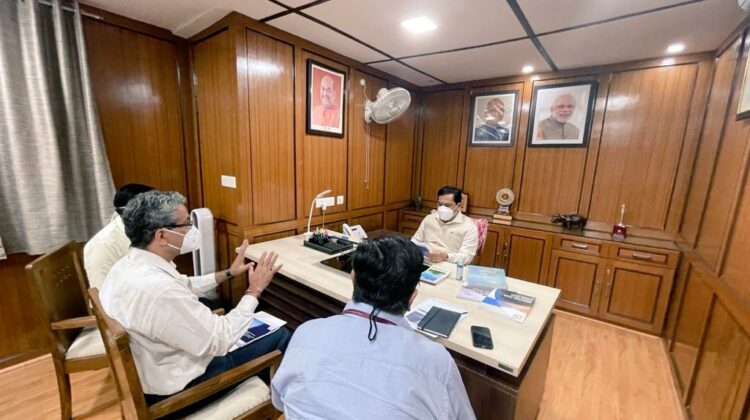 NEW DELHI : Shri Sarbananda Sonowal takes charge as Shipping Minister and held a preliminary meeting with senior officials of the Ministry of Ports, Shipping & Waterways (MoPSW) in New Delhi on Thursday and took an overview of the Ministry.

Shri Sarbananda Sonowal has the tough task of navigating the shipping sector that is facing the storm of astronomical freight rates and scarcity of containers, which is hurting exporters

The new minister of Ports, Shipping and Waterways, Sarbananda Sonowal, takes charge at a time when the shipping industry is in choppy waters.

Shri Sonowal, who has been the Chief Minister of Assam, will have to deftly steer the industry that is reeling under the shortage of ocean transportation capacity and soaring freight rates.

The sector has been through a rollercoaster ride this year. It faced a shortage of containers in April after a grounded ship blocked the Suez Canal. The situation improved and exports boomed but containers are again scarce.

The new minister needs to quickly deal with the problem of high freight rates and shortage of containers, which are hurting exporters.

Containers are scarce at a time when Indian exports have surpassed $95 billion in Apr-Jun 2021. Demand for containers is expected to remain high for the rest of the year.

Freight rates are close to record levels, which is squeezing Indian exporters, who often quote a delivered price, including transportation costs, to buyers.

The crisis began in late 2020 due to a sharp mismatch in import and export volumes, leading to a shortage of containers available for exports. The problem was amplified as economies started opening up at the same time, leading to congestion in ports.

Non-availability of space in vessels calling on Indian ports and delayed availability of certain destinations, particularly in east Africa, are the other issues affecting trade. As a result, both the demand, and prices for containers had skyrocketed.

The Federation of Indian Export Organisations (FIEO) has urged the government to establish an indigenous shipping line to tackle these issues. The new minister will have to assess the merits of the suggestion, which will help exporters in the short term, but it also has several challenges.

Indian importers and exporters want the capacity of all ports to increase as trade has risen in recent years. Industry executives say that transhipment at foreign ports delays Indian cargoes, which makes Indian companies uncompetitive in the global market.

Currently, most of India’s cargo is transported through roadways and by rail. The government enacted the National Waterways Act, 2016, to create 106 new waterways on many rivers, river stretches, estuaries, creeks, backwaters and canals in the country.However, adequate progress has not been made, and some experts say that deeper analysis is needed to accurately assess the cost and environmental benefits of waterways.