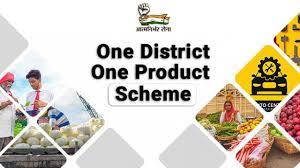 NEW DELHI : What is common between Jamnagri Bandhini, Kolhapuri chappals, Kashmiri Papier Mache, Naga chillies and Tamil Nadu machine parts? They have all been selected for export promotion and improvement of market accessibility under the first phase of the One District One Product (ODOP) scheme.

The initial phase of developing districts as export hubs, being implemented by the Commerce Ministry in collaboration with States, focusses on 106 items spread across 103 districts.

“Once the initial batch of products are extended, the required support for integration into supply-chain, brand-building, marketing, and reaching customers through e-commerce and more products from all 739 districts will be worked upon,” an official told.

The mandate of the ODOP programme includes identifying, understanding, and solving problems associated with each of the chosen products at all points in their respective supply chains. “Improving the market accessibility of the chosen products, and dedicated handholding of the producers to harness the export potential of their products towards not only diversifying India’s export basket but also making the products globally competitive,” according to a note prepared by Invest India, the government’s investment promotion and facilitation agency.

Prime Minister Shri Narendra Modi had endorsed the ODOP and had identified it as one that could foster balanced regional development across all districts of the country. The idea behind the initiative is to select, brand and promote at least one product from each district of the country.

“A dedicated team has been established to identify products from 739 districts and create a comprehensive plan on each of these products including product branding & scheme awareness, trade facilitation, e-commerce onboarding, and to create forward & backward market linkages,” the note pointed out. The objective is to convert each district of the country into an export hub by identifying products with export potential.

Some of the items identified for the first phase are ones that already are well known in the country as they have been around for centuries and could benefit significantly from brand building and promotion. Jamnagari Bandhani, for instance, is a handloomed textile product from Gujarat dating as far back as the 6th Century AD, the note pointed out.

The Kolhapuri Chappals from Karnataka and Maharashtra go as far back as the 12th Century AD rule of King Bijjal of Bidar, while the Sakhta Artisans of Kashmiri Papier Mâche pride themselves with the art since 15 Century AD. Blue Pottery from Jaipur and Markhana Marbels from Nagaur in Rajasthan feature in the list too.

A number of exclusive agricultural items are also included in the initial list of products to be promoted under the scheme. One of the world’s hottest chillies, the Naga Mircha from Nagaland, and the world’s finest turmeric, Lakadong, with an average curcumin content (ingredient that gives turmeric its healing properties) of a high 7 per cent from Meghalaya, are among the selected items. Processed industrial products, such as machine parts from Tamil Nadu, and pharmaceutical produce from Andhra Pradesh, are also in the initial list of products.

“With India’s export target set at an ambitious $400 billion for the current fiscal and $1 trillion for 2027-28, the government has to make a rounded effort to step up exports from the country. The ODOP effort is to ensure that the drive to increase exports do not favour just a few States but encourage development in all parts of the country,” the official added.