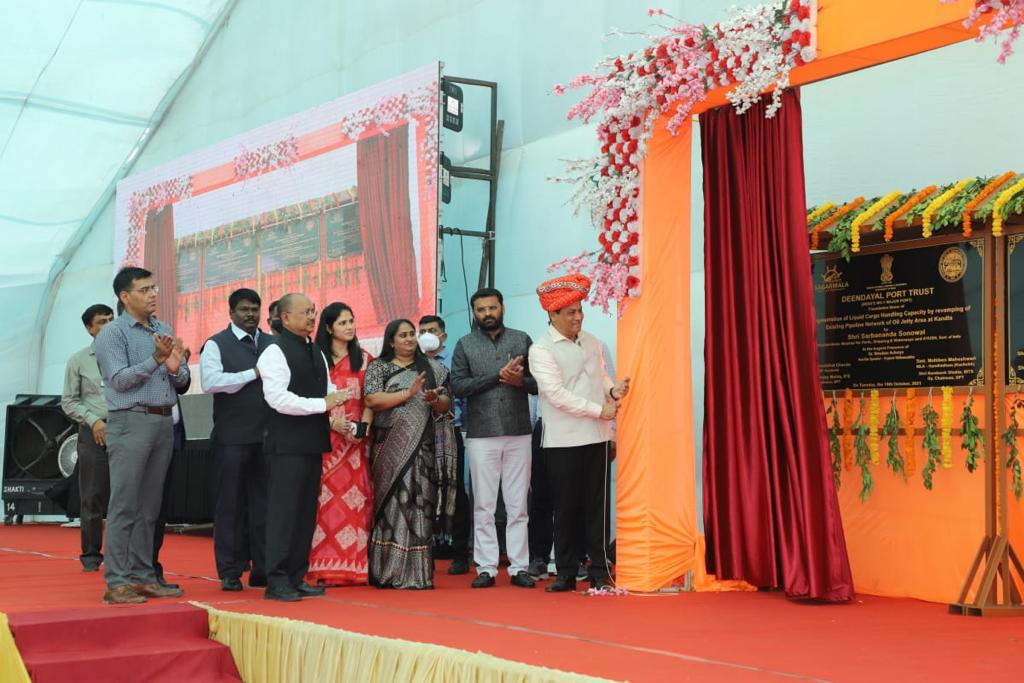 GANDHIDHAM : Union Minister for Ports, Shipping & Waterways and AYUSH Shri Sarbananda Sonowal laid the Foundation Stone for various capacity augmentation projects at Deendayal Port on Tuesday, the 2nd day of his visit at Kandla. These included:

• 2 Nos. Dome Shaped Godowns to be constructed within 12 months which will increase the covered storage capacity by 1.45 lakh metric tonnes at a cost of Rs.36 crore.

• Oil Jetty No.8 at Old Kandla at a cost of Rs.99 crore, which will be constructed in 18 months’ time and increase the optimal capacity of Port by  3.50 MMTPA and reduce the waiting period turnaround time of vessels.

• Parking Plaza for Trucks/Vehicles with ancillary facilities like canteen, garage, rest shelter, etc. being developed for pre-gate verification of documents to ease congestion of vehicles at the gates corresponding with digital initiatives like EBS & RFID being installed at these gates at a cost of Rs.14.59 crores.

• Modernization of existing Pipeline Network, at a cost of Rs.126.50 crore has also been taken up for operational efficiency and to improve handling capacity of edible oil and chemicals at the Port.  The project will increase the optimal capacity from 8 MMTPA to 23.8 MMTPA.

The Minister inspected the progress of ongoing work Road-over-bridge at LC-236, Kandla being executed by M/s. IPRCL.  Incidentally, the foundation stone of this prestigious ROB project was laid by the Prime Minister. Shri Sonowal also inaugurated the “Aayush Van” “आयुष वन” at DPT’s Rotary Forest for nurturing various ayurvedic plants.  He inspected tree-plantation being done on 30 acres of land allotted by DPT in Green-belt area to improve greenery in urban area and density of tree cover in the Kutch Region. To watch Inauguration of Ayush Van, at DPT-Rotary Forest, click here https://twitter.com/i/broadcasts/1rmGPgaywWYKN

Shri Sarbananda Sonowal inspected the Navigational Channel, Waterfront and Port Facilities, Railway Sidings and visited the entire wharf area upto Cargo Jetty No. 16 in order to have an overview of the developmental works taken up by DPT.

The Minister later briefed the members of Press, Print Media & Digital Media about various development projects being taken-up by Deendayal Port Trust in line with Prime Minister’s vision of GATI SHAKTI National Master Plan. Shri Sonowal emphasized that DPT will continue to provide world class infrastructure facilities for the smooth and fast evacuation of EXIM Cargo for the benefit of Port & Maritime Sector.  He also held meeting with the Trade Unions operating at DPT and assured them that all their genuine demands will be resolved  in a time bound manner.

Shri Sonowal also visited KICT Container Terminal at DPT’s Berth No.11 & 12 and witnessed the mechanized handling of containers and stacking yard.  He also visited MCC, Kandla and inspected Operational Room and Tower of VTS-Gulf of Kutch during his interactive meeting with the officials of DGLL and Stakeholders.

During his visit to Salt Pan Lands, Shri S.K. Mehta, Chairman, DPT briefed the Minister on the Salt Manufacturing process, which largely contributes to the salt production in the country. The Minister also interacted with local salt pan labourers “Agariya families”. He also visited DPT’s Tuna Satellite Port, and inspected handling of country made vessels for export of “Live Stock”.

Hon’ble Union Minister planted a sapling at M/s. AKBTPL’s Bulk Terminal and had interactive discussions during the presentation made by the officials of M/s.AKBTPL at the Multipurpose Cargo Bulk Terminal at Tuna-Tekra.

The Hon’ble Union Minister for PS&W and AYUSH, Shri Sarbananda Sonowal, applauded the performance of Cultural Team, who presented Raas-Garba & Kutchi Culture (Gujarati) through their performance. The Hon’ble MP-Kutch, MLA-Gandhidham, Chairman DPT & other dignitaries were present.

It is heartening to mention that Hon’ble Union Minister was warmly welcomed during his maiden trip to Kandla at all the places he visited, by the members of Shipping Fraternity, Salt Manufacturers and Trade Union Leaders.