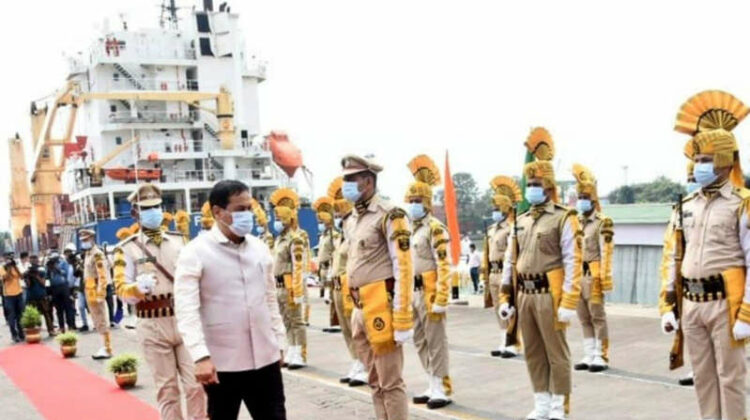 KOLKATA : The Union Minister of Ports, Shipping and Waterways, Shri Sarbananda Sonowal, claimed that the north-east is going to emerge as the growth engine of the country and Syama Prasad Mookerjee Port (SPMP) in Kolkata is going to play a pivotal role in terms of ‘cost effective’ import and export through national waterways.

Addressing a press conference at Syama Prasad Mookerjee Port Trust (SPMPT), Sonowal said, “For the development of the north-east and to boost the prospect of trading in the north-eastern region, we will connect waterways 2 (the Brahmaputra from Dhubri to Sadiya was declared as National Waterway no. 2) and waterways 16 (Barak River, which is the second-largest river in the North Eastern Region) with Syama Prasad Mookerjee Port in Kolkata. It will connect to the Bay of Bengal.”

While announcing several projects along the river Brahmaputra and Barak valley through SPMP, he said, “The north-eastern States are growing today because of the sincere and dedicated effort from our Prime Minister Narendra Modi. We are committed to taking his vision and mission forward to make SPMP a world-class port so that it can give mileage to import and export prospects. This will also help us in doing cost-effective waterways with our neighbouring countries like Bhutan, Bangladesh and Nepal.”

During the day, the Union Minister inaugurated various projects worth Rs 354 crore and said, “It is an honour for me to be here at the SPMP. This port is a pride of India and plays an important role in the nation’s development. I am sure in future with the support of people in West Bengal, this Port will be equipped with more advanced technologies which will add more power to India’s waterways transport system. This port will help us in making a self-reliant India.”

He said, “I would like to request all the State governments including the West Bengal government to send their proposal related to waterways and I promise that we will get it done for the sake of nation-building. Our north-east States were neglected but after Modi ji came, he worked hard for the development of the north-eastern States.”

On Sagarmala projects, he assured that all the pending work will be completed soon and stressed good coordination between the shipping and the customs department for better import and export opportunities for the business houses.

The Sagarmala Programme is the flagship programme of the Ministry of Shipping to promote port-led development in the country keeping in mind the 7,517-km long coastline in India. It aims to modernise various ports in India, so that waterways can be augmented and coastlines can be developed to contribute to India’s growth.

Meanwhile, the Garden Reach Shipbuilders and Engineers Ltd, (GRSE) has signed the ‘Concession Agreement’ with SPMP to undertake the development and utilisation of the three existing dry docks at Khidderpore in Kolkata.

The project envisages upgrading, operating and managing the infrastructural facilities at these docks towards their effective utilisation. The agreement was signed in presence of Sonowal and other senior officials of GRSE.

As part of the investment promotional activity of Maritime India, the agreement will play an important role in the growth of both GRSE and SPMP. It will also generate revenue from the ship repair and refit of defence and commercial segments, predominantly in the eastern region.