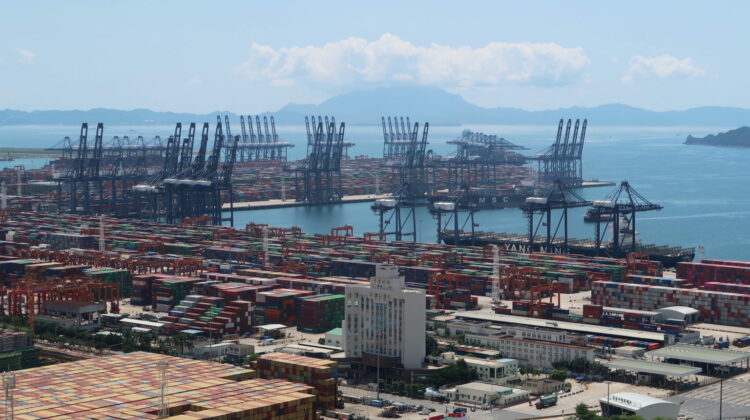 BLOOMBERG : Extreme weather in China is becoming the latest challenge to global supply chains, as a heavy typhoon season threatens to further delay goods stuck at some of the world’s busiest container ports.

Yantian port in southern China’s export and industrial hub of Shenzhen temporarily stopped drop-off services of containers on Tuesday night due to a typhoon alert. Just two weeks earlier, Shanghai’s Yangshan mega-terminal facility and nearby ports evacuated ships as Typhoon In-Fa slammed into the coast, bringing widespread flooding and toppling containers stowed in the hold of a bulk carrier traveling to the U.S.

Heavy rain, high winds and flooding this year are tying up global trade as the already overstretched shipping industry struggles to recover from disruptions ranging from Covid-19 outbreaks to geopolitical unrest. There may be worse to come, as officials predict more typhoons will hit China this month.

From August to December, 16 to 18 typhoons are forecast to form in the Northwest Pacific and South China Sea, the Meteorological Administration said Wednesday. Four to six of these are expected to make landfall in China or affect the country.

“Each time a port is forced to close, containers continue to pile up, adding to existing delays,” said Alex Hersham, CEO of digital freight-forwarder Zencargo. “And as this season is expected to be heavier than usual for tropical cyclones, we can expect more delays like this.”

Supply chains have faced a string of bad luck this year. A Covid-19 outbreak among port staff was to blame for a partial closing of Yantian in May, leading to container goods piling up for a month. As ships diverted away from southern China, some factories in the nearby manufacturing hub of Guangdong shut down because of excess inventory that couldn’t be exported, according to analysts and logistics intelligence firm project44.

“The impact of Yantian’s closure was unprecedented on the supply chain because it serves one of the world’s largest manufacturing bases,” said Salmon Aidan Lee, head of polyesters at consultant Wood Mackenzie Ltd. “If we have a few more typhoons that come our way, and knock down production a few days each time, this problem will get worse.”

While the average waiting time for a container to be exported at Yantian has dropped to five days from 25 in June, and operations resumed at the port Wednesday evening, the situation could easily worsen again if weather-related delays at other Chinese ports build up, said Hersham.

The disruptions are driving the cost of shipping a 40-foot box from China to the U.S. to record levels above $10,000, according to maritime consultant Drewry. Ultimately, the snarls will add to inflation, said Lee, who predicts U.S. consumers will have to pay about 20% more for Christmas presents — from toys to furniture.